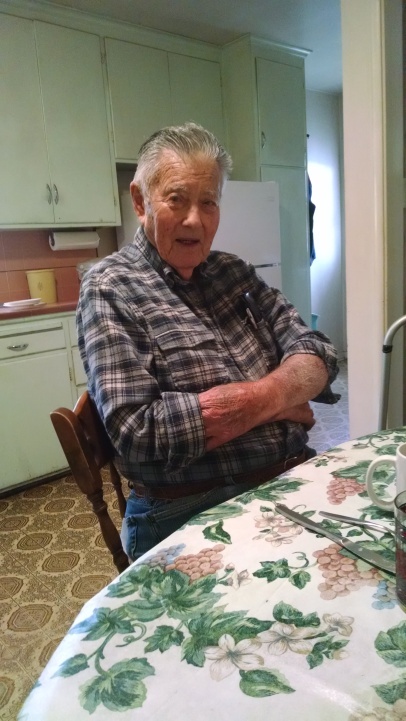 At 6:30 p.m., I look at the clock and think, “I’ve got to call Dad.” Then I remember. I can’t do that anymore. I can forget his phone number. I can stop carrying my cell phone everywhere for fear I’ll miss an emergency call.

That call came at 3 p.m. on Saturday, Aug. 10 as Annie and I were walking up Thiel Creek Road. Within an hour, I was on my way to San Jose, adrenaline flowing so hard I didn’t feel hungry or sleepy or even need to pee. I just wanted to get there before IT happened.

By the time I stopped in Roseburg for the worst quarter-pounder ever at a McDonald’s where I had to interrupt the worker’s video game to place my order, my brother had sent a text saying that my father was no longer “critical.” Whew.

I cruised into the Best Western in southern Medford at 9 p.m. and went to bed at 9:30. Back on the road early the next day, I arrived at Kaiser Hospital at 3 p.m. My brother Mike was already there. My father didn’t look good. It was the first time I’d seen him hooked up to an oxygen tank. He refused to eat, but we were still able to talk. I’m sure when he saw both of his kids there at the same time, he knew things were not going well.

The hospital sent him back to Somerset Senior Living, where he’d been since June. But the end was coming. Suffering from congestive heart failure, kidney failure, a broken leg that had never healed, and a monster of a bedsore, he went downhill. He stopped getting up in his wheelchair, stopped eating, stopped talking, stopped. On the morning of Aug. 21, Ed Fagalde passed on to the next life.

I’m grateful I had a chance to sit with him. We said all the things we needed to say to each other. I sang to him that last night. At 97, this vigorous, talkative, power of a man was ready to go, and finally God was ready to take him.

“Sue, are you okay?” he asked me at one point. “Is Mike okay?” I assured him we were both fine, just worried about him. That seemed to be his main concern, that we be happy and healthy as we go on with our lives. We are, and we will be, but it’s tough right now.

My father and I were close. You know how you have that person who when they call, you say, “Oh, hi,” and sit down to enjoy the call? He was that guy in recent years. Both widowed, we shared the frustrations of living alone. I gave him cooking tips, and he advised me on home repairs. When I was in San Jose, we went to everything together. Sometimes people mistook me for his wife. I do look like my mother, and at 67, I have almost as much gray hair as Dad had. During those times, it was nice not to be alone.

I was always proud of my father. Smart, handsome, and strong, he was a farmer, a WWII veteran, and an electrician, blue collar, not rich. So what? He could have been anything, but he chose to work with his hands. Lord, those hands took a beating. In his spare time, when he wasn’t fishing or goofing around with his CB radio, he was working on the house and yard; he built so much of it himself.

And when he finally sat down to rest, he told stories. So many stories. He could make a story out of a trip to the gas station. I think that’s how I got to be a writer. I learned the gift of story from him, but never able to get a word in edgewise, I wrote my stories down.

Thank you, Dad. I’m so glad you’re not suffering anymore, but I sure will miss that voice on the phone, those stories I’ve heard so many times and wouldn’t mind hearing again.

The funeral Mass for Ed Fagalde will be held Sept. 13 at 10:30 a.m. at St. Martin of Tours Church in San Jose. An online obituary will be posted soon.