I’m reading a book called Merle’s Door that describes a relationship between the author and his dog which is quite different from what many of us have, especially if we live in cities or suburbia. His owner, Ted Kerasote, allows Merle to come and go, unleashed, letting him have his own independent life. The book goes deeply into the history of dogs, how their brains work and how they behave. It makes me reconsider every interaction with Annie.

For example, when I sit down on the couch and Annie leans all her weight against me, she’s asserting dominance. When I lie down and let her stand over me, I’m letting her dominate me. When she makes yawning noises or licks her lips, she’s anxious. When she grabs paper and runs past me making lots of noise, she wants me to play with her. I like to think I’m the alpha dog, but sometimes I’m not so sure.

Merle’s dog door allows him access to a world that is not fenced in. It’s a metaphorical door as well as a literal one. Annie has a door, too, but I panic if she gets outside the fence. I’m afraid she won’t come back. I’m also afraid she’ll get into a fight with another dog. I wonder what she thinks when I leave.

Sunday at the dog park, a woman with two white Scotties wearing bandanas left both gates open and Annie ran into the forest. Not that she didn’t like the dog park. She was eager to get there, even though there were no dogs around at first. Eventually, a guy came with a seven-month-old gray lab/pit mix named Shadow and a white fluff ball named Roxie, and a lady came with a full-sized black poodle who pranced instead of walking and a teacup poodle that is smaller than most cats. Annie mostly kept her distance, looking on from afar, but she wagged her tail and seemed glad to see them. Not a sign of aggression. The next day on our neighborhood walk, we met a new dog, and my sweet girl tried to kill him. Was it because she was on a leash? Was it because the dog was whining at her? Why is she mellow in the dog park and aggressive on the street? If only she could explain.

And why do I go into such a panic when she takes off? It was a pretty safe area, mid-afternoon, no cars, no wild animals, but I immediately set out to get her back on the leash. She kept me in sight but stayed out of reach, tail wagging, lips grinning, leaping over shrubs and mud patches and into the construction area at the nearby community college. When I turned away, she followed me at a distance, finally running around the outer rim of the dog park and meeting me at the car. Should I trust her more? I have been conditioned not to, fearing cars, animals, and my dog attacking something. Also, in most cities and suburbs, it’s illegal to let a dog run loose. Kerasote, who lived in the wilderness near the Grand Teton National Park, had a different arrangement with Merle. He allowed the dog to go off on adventures and return when he was ready. He trusted him to know what was dangerous and take care of himself. It seems like a much more respectful connection.

The book lingers in my mind every time I interact with Annie. She looks like Merle, but she is not Merle. All she knows is her life with me. Still, sometimes I think she may be smarter than I am. Yesterday, after I got home from Albany, I got out of the car and discovered it was warm in my driveway, not just sunny but actually warm. So I changed my clothes, grabbed the dog and her leash, and drove to Ona Beach. I had promised Annie that she could go swimming as soon as it got sunny. She had been flattening herself into every mud puddle, paddling her paws, clearly wanting to swim.

From the parking lot, I saw that one of the main paths was flooded. We could just start swimming there, but Annie dragged me away from it and toward the beach. As we moved away from the parking lot, we felt an icy wind coming off the ocean. So cold! But maybe it would be okay on the sand. No, it was freezing. Still, I was determined to get us into the water. Annie complied, charging into the river that merges with the ocean. Holding her leash, I followed, walking through ripples halfway up to my knees and then all the way up to my knees. Ice water.

Annie paddled for a minute, but that was enough. She led me out and we ran on frozen legs toward dry sand. I expected her to go back into the water, but she declined. We sat in the sand awhile, Annie leaning against me, then got up to go home. I purposely led us to the flooded path. Maybe it was deep enough for Annie to swim in. I sloshed right in, my thongs and pants already soaked, and forged ahead like a snowplow through the water, spray reaching all the way to my hips.

“Come on,” I said to Annie. She looked at me like I was crazy and skirted along the muddy edge. Once I was in, I had no dry way out wide enough for human feet, so I got wetter and colder until we reached the car, opened the door and Annie jumped in. At home, she rolled on the grass and I lay on the deck trying to get warm. I could just picture her shaking her head, thinking, What an idiot. That water is COLD.

And now she’s sleeping in front of the pellet stove while I work. Dogs are obviously smarter than people. 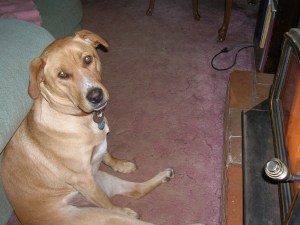 One thought on “What is My Dog Thinking?”