I had so much fun flying to and from San Jose last week that I’m driving when I go back next week.

It’s not the fact that I’m 25,000 feet above the ground and will die if we crash. I don’t understand what keeps the plane in the air, but I put myself in God’s hands and try not to think about it. I love looking down at the landscape below, picking out the landmarks and enjoying the cloud patterns. I love that I can get from one place to another so quickly.

I flew Alaska Airlines from Eugene, Oregon to San Jose, California. Alaska is fine. They do their best. But there’s a lot about the flying experience I could do without.

Flying isn’t what it used to be. I used to enjoy airplane food with all those cute little packages. Now they toss you a bag of Cheetos or pretzels and a glass of something. They don’t let you bring your own food and drink through security, so you have to buy something in the terminal or go without. I hate the luggage restrictions. I’m constantly worried about being caught with something I’m not allowed to have on the plane. I have to pay $25 extra to check a suitcase which will be X-rayed and possibly searched?

The planes that fly short distances are getting so small you can’t walk down the aisle without raising your arms and scooting sideways. You can’t count on free movies or music anymore. Instead you can rent a tablet-type device. People sitting side by side don’t talk to each other. They turn on their phones, tablets or laptops, plug in their earplugs and tune out everything.

And I can’t imagine having sex in the bathroom. This one was so small they didn’t even have a sink, just a plastic bottle of hand sanitizer.

Flying anywhere from the Oregon coast means driving two or three hours to an airport in Eugene or Portland. Add that to the extra time needed for check-in and security, plus getting something to eat and drink, and it’s a whole-day adventure for an hour, forty-minute flight.

Then there’s security. If I’m lucky, I get the older woman who always goes to the same place treatment and can bypass taking off my shoes and jacket and unloading my laptop. It’s unnerving to be getting a half-dressed full-body X-ray in one place while my purse and computer are rolling off the conveyor belt somewhere else.

Things went all right with security this trip. The line in San Jose was long, but I didn’t have the problem I had last time I flew out of there. I was so rattled that when they asked for my ID, I handed them my debit card. Oh-oh, go straight to the problem-passenger line.

No, the trouble started when I decided to eat dinner at the sports bar near Gate 28 in the B terminal. It was 5:30, and the place was jammed. Tattooed waitresses in black kept passing by me instead of finding me a table. When I did get seated at a tiny table for one amid other tiny tables for one, nobody came. I watched the servers bring second and third beers to the guys at nearby tables, but I didn’t even have a glass of water. I was afraid I would run out of time if I tried somewhere else. After 25 minutes, I got up, chased a waitress down and threw a loud hissy fit while people stared at me. I am embarrassed to think about it now, but I got my food and drink in three minutes. It wasn’t very good, but this squeaky wheel got the grease.

When we boarded the plane, I found myself in the aisle seat next to an immense woman whose flubber took up half of my seat as well as all of her own. I felt sorry for her, but I’m not used to being so intimate with a stranger. She didn’t want to talk, just listened to her music and looked at stuff on her phone. Her husband, equally large, sat across the aisle. When the plane finally landed, he immediately stood, placing his rear end in my face. Nobody was moving, but there he was, a wall of man-flesh in blue jeans.

As I mentioned earlier, the aisle was narrow. Our two flight attendants were unusually wide people. They banged my arm every time they passed by. My restless legs went crazy. It was dark in the plane, and my seatmate didn’t enjoy my turning the light on to read, but I had to do something. I couldn’t see out the windows at all.

A little before 10 p.m., we landed. I rolled my suitcase out to the far end of the long-term parking lot, surrounded by groups of people all glad to see each other. I shed a tear when I saw my Honda Element/aka The Toaster waiting patiently to take me home.

It will be me and The Toaster next time.

My father, who broke his upper leg in March, moved to an assisted living facility last week. It’s a pretty place, a former convent with a chapel, crosses etched into the fences, and a lush rose garden. He will stay there while he continues to heal. With luck, the doctor will let him start putting weight on the leg in a couple weeks and then he can work on walking until he can walk himself out of there and go home. He’s healthy otherwise. Today is his 95th birthday, and he’d rather be spending it anywhere but there.

The last plane he flew on was an Army Air Corps plane during World War II. 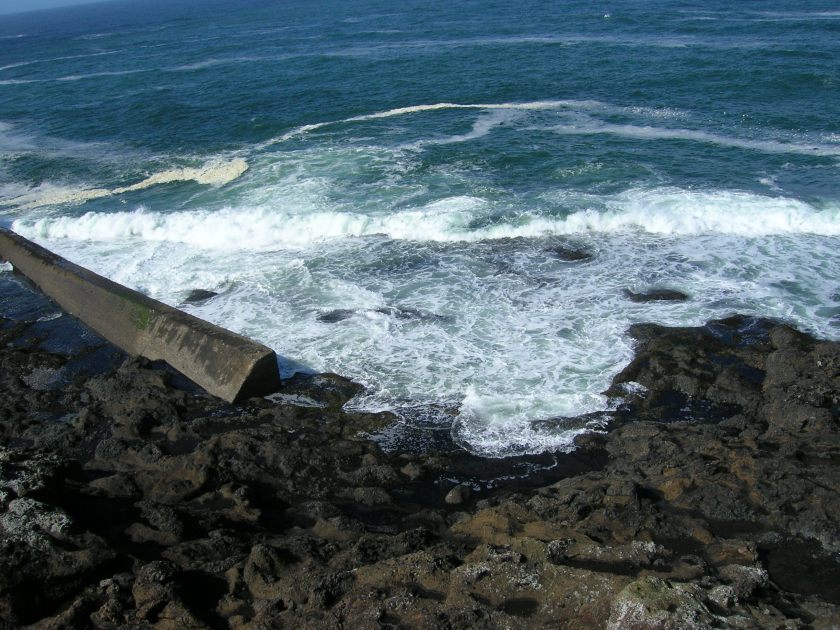 Some days I just have to run away. If I had a regular job, I’d have to stifle that impulse, but as a writer working from home, I can jump in my car, drive to the highway and decide to go either north or south. Last Thursday, with my car finally back from the body shop, I chose north.

I needed to get reacquainted with my Honda Element, sometimes known as The Toaster, after almost two weeks driving the black bomb, a low-slung Toyota Corolla that was fast, quiet, fuel-efficient and had a great stereo. In comparison, the Toaster feels like a truck. Now it’s a truck with many shiny new parts. Since the accident, I had become a very nervous driver. I needed to get over that.

Thursday’s adventure started in Depoe Bay, where I joined the tourists watching for whales and taking pictures. It was a gorgeous day, the waves wild and many shades of blue. As I stood outside the whale-watching center with my camera, a stranger said, “Look over there. A whale. You’ll see his spout in a minute.” To be honest, I never saw it, but it felt good staring at the waves, resting my eyes after too many hours staring at a computer screen. Workers at the center keep a tally of whale sightings. Folks had already seen eight by 11:00 that morning. They counted 11 the day before.

From Depoe Bay, I continued north to Lincoln City. School may have started, but we still have plenty of tourists, many of them driving gigantic motorhomes. Slow. But I wasn’t in a hurry. Ooh, Robert’s Bookshop. A goldmine, but I had already purchased at least a dozen books in the last month. The outlet stores. Didn’t feel like shopping. Library. Again, too many books. Antiquing? Yes, but later.

I have grown fond of the Pig n Pancake restaurant in Newport, housed in the old city hall building. So when I saw the Lincoln City P n P, I decided to eat there. The place was jammed. Noisy. It wasn’t a dining experience; it was a feeding trough. Party of one? The hostess led me to a tiny table barely big enough to get my body behind and slapped down a menu. The next party was too close for comfort. And I thought: no. I walked out, got back in my car and kept driving north.

I did a lot of grumbling to myself about how if my husband were still alive, this trip would be a lot more fun, and nobody would stick us in a corner. He loved these field trips.

I was thinking I’d go to the Pelican Pub in Pacific City, but first I came to Neskowin, a tiny beach community where I sang during a 2014 garden tour. That day, running late and fixated on the gig, I didn’t notice the Cafe on Hawk Creek just off the highway. But I saw it this time. It looked cute and uncrowded. 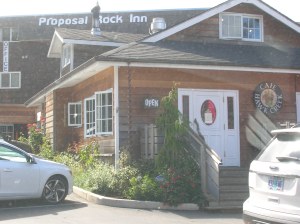 I walked in, the hostess took one look at me and said, “Two?” Um, no. But that was the only negative thing. She sat me at a big wooden table, and I sank into a soft-cushioned seat. I ordered the chicken club sandwich, but this was not the usual three slices of bread with lunch meat chicken, bacon, tomato and lettuce. This was a giant hunk of fresh-baked chicken, fat slices of bacon, tomato and onion and cole slaw on a ciabatta roll. Heaven on a plate. I sipped my iced tea, read my book and luxuriated in great food. The waitress left my bill but assured me there was no rush. The meal fed my soul as well as my body.

I had gone far enough. Backtracking to Lincoln City, I spent the next couple hours wandering the aisles of the Little Antique Mall at the north end of town, where I scored some 1930s sheet music and vintage handkerchiefs. I love looking at old stuff and listening to old music.

I got home in time to catch some sun on the deck and quality time with the dog. All in all, a great runaway day. Now that the toaster had a little dirt and few more miles on it, it was time to go back to work.