Many years ago, my parents visited Klamath Falls, Oregon. Dad wanted to check out the place where his mother, Clara, started her teaching career around 1912. He had heard stories of the one-room schoolhouse, of Native Americans coming to the door, of the farm family she lived with, of students who were bigger than she was and nearly as old. My father asked around and was given directions to the school. He and Mom visited the vacant schoolhouse and talked to a neighbor who shared lots of information about it. Dad tells this like it was last week, but it may have been 50 years ago. Klamath Falls has changed a bit.

I rolled into Klamath Falls around 2 p.m. after my explorations along Highway 58, detailed in Monday’s post. The rain had stopped, and the sun was out. I had traveled the last few miles along Upper Klamath Lake and looked forward to communing with nature in a smallish town. Uh, no. With more than 20,000 residents, it’s plenty big. Taking the downtown exit, I found myself in the midst of brick buildings, traffic and one-way streets. The 12-block Main Street gave way to newer buildings and an area that looked just like every other strip-mall-laden city of any size in the west. McDonald’s? Check. Dollar Tree? Check. Staples? Yep. Bi-Mart, Sizzler, Elmer’s, Dairy Queen? All there. Thick traffic with cars turning and darting in front of each other? Check. Holiday Inn Express up ahead. I checked in.

On my two days in Klamath Falls, originally named Linkville when it was founded in 1867, I felt a duty to report to my dad what I saw. I toured the old downtown on foot, taking pictures. Except for the modern courthouse and city hall, most of the buildings were old, dates from the late 1800s and early 1900s etched in the brick and stucco above establishments that now housed thrift shops, lawyer’s offices, art galleries, etc. Quite a few buildings were vacant. The shops were trendy, but I saw plenty of pickups and local men in cowboy hats. Or, as the booklet from the visitor and convention bureau put it: “While there’s a flair for the Western in Klamath Falls, a whole new urban vibe is visibly underfoot.”

I guess I’m an urban vibe-er because one of my favorite stops was the coffee shop, A Leap of Taste, where I stopped to listen to music by a band of three guys and a woman about my age playing folk music. I drank designer tea and ate the best gluten-free oatmeal-raspberry pastry I ever tasted.  Around me, tattooed teens stared at their tablets and laptops, ignoring the musicians, and a young couple on the sofa bounced their baby to the beat. 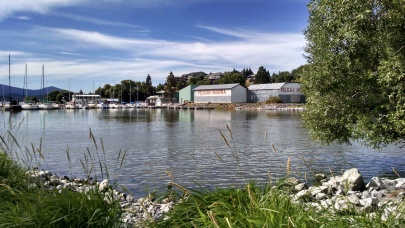 Other highlights: the Klamath County Museum—not your mother’s boring lineup of black and white photos but a fascinating collection of old appliances, cars, gas pumps, clothing, dioramas depicting the Indian wars and the Japanese internment at nearby Tulelake, and more, more, more. One wall showed pictures of the area’s old schools, including the one where Grandma Clara taught.

Down the road, I also stopped at the Favel Museum of Western Art and Native American Artifacts. Also wonderful. One of the featured artists, Michael Gibbons, is a friend who goes to my church. Small world.

Beyond that, I discovered Lake Ewauna and a bird sanctuary with herons, egrets, gulls and pelicans. Ah, nature. A large park there provides places to sit, sprawl, and relax. Just watch for the bird doody. 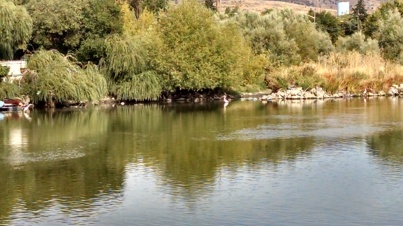 I toured the Linkville Pioneer Cemetery. I love walking among old graves, imagining the lives of the people buried there. This cemetery is the resting place for lots of soldiers who fought in past wars. I had a heck of time finding the cemetery. I did the downtown loop five times, constantly fighting one-way streets that went the wrong way, before I rechecked the map and learned I was going the wrong way. I swear if I were Lewis and Clark, I would have ended up in Portugal.

In the new section of town, I skipped the chain stores and visited Basin Book Trader, a massive collection of used books for which locals trade their own used books. I scored three titles I would never have been able to afford or probably even find anywhere else.

Another delightful find: Nibbley’s Café. Bright and sunny, waitresses friendly, food delicious and served in huge portions. Many of the diners were seriously overweight. No wonder. Good thing I only had time to eat there once.

I don’t do the stuff the tourist guides boast about. I didn’t need to visit the Kla-Mo-Ya casino or one of the four golf courses in the area. I had already been to Crater Lake. I was definitely not zip-lining. But it’s all there for folks who like it. Drinking tea and listening to music is more my speed. But hey, in October, they have the Klamath Basin Potato Festival. I might be interested in that.

Soon my two days were up, and it was time to think seriously about heading south toward San Jose. Highway 58 turns into I-97 at Klamath Falls. Driving south, that would take me to Weed, California, where I could jump onto I-5 and take my usual route to Dad’s house, where I would tell him what I had seen in Klamath Falls. He would continue to see it the way he remembers it from many years ago.

Before San Jose, I had one more stop: Lava Beds National Monument, which I’ll talk about next time.

Ever been to Klamath Falls? Tell us about it.