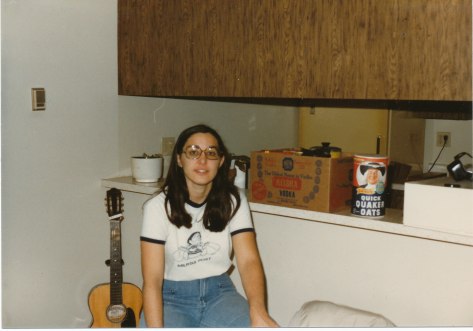 On Fourth of July, when current life got to be too much, I tackled a box of photos and memorabilia saved from my father’s house. I couldn’t face it before, my father’s death too fresh, but now I marveled at the treasures inside: a Roi Tan cigar box full of pictures of me and my family in all our previous lives. Newspaper clippings. Letters. A man’s wedding ring I’m wearing on my index finger as I type this. Photo albums more than a hundred years old from my father’s mother, Clara Fagalde, who died when I was two. The tiny black and white photos show her teenage years, the boyfriend who preceded Grandpa, soldiers in WWI, people wearing masks during the 1919 influenza epidemic, old cars that were truly “horseless carriages,” Clara’s days as a young teacher in rural Oregon, and the clearest photos I have seen of her parents, Edward and Paulina Riffe. So much. So many people who have died, but somehow these pictures helped me to feel less alone, as if my family were still all around me.

I learned some things. Grandma Clara did speak German, as evidenced by her captions with the photos. I always wondered. If she had lived, would I know some German, too? Her mother, who was cute and round, must have been in her 40s when she died in a car accident. My great-grandpa Joe Fagalde was my age, 68, when he shot himself in 1939. His widow, my great-grandma Louise had to go to court to fight to stay in the house they shared, laws being what they were back then. That box held so many stories that I’m itching to explore.

I was fascinated by the pictures of myself. Be honest, you stare at photos of yourself, too. There I was, the adorable toddler, the earnest Girl Scout, the hippie wannabe, the dressed-up professional, the older lady . . . wait, how did that happen?

The photo above from 1981 sparked the poem that follows. My first husband and I had split. I was just moving into my apartment in Pacifica, California, where I had a new job as a reporter at the Pacifica Tribune. I had a different last name then, Barnard, and I can’t believe how skinny I was. I lived a block from the beach and used to go running there after work. I drove a yellow VW Rabbit that was in the shop more than it was on the road. I was just beginning to explore the life I might have had sooner if I hadn’t gotten married two weeks after I graduated from San Jose State. Back then, I was writing poetry and playing music, same as now. I look much different, but I’m the same on the inside.

Anyway, on with the poem.

She’s 28 going on 17,
sitting cross-legged on the floor
of her apartment, the furniture
still at her parents’ house.

Against the wall, a sleeping bag.
Marriage failed, she can’t wait
to claim her space, to lock the door,
to plug in her brand new Princess phone.

On the counter, a box of Quaker Oats,
an avocado green tea kettle,
a vodka box of Campbell’s soups,
Log Cabin syrup and pancake mix.

Beside her, a Blue Chip stamp guitar,
La Valenciana, fingertip dents
on the first three frets. Nearby,
a battery tape deck, fresh cassettes.

Her life still fits in a pickup truck—
clothes, sewing machine, books,
typewriter in a baby blue case,
paper with that wood-pulp smell.

She stares out the window at the fog
shredding to reveal hints of blue,
scrabbles in her purse for a pen,
writes the date on a clean white page.

2 thoughts on “Photo Takes Me Back to Pacifica, CA”