We’ve got bunnies in the bushes. Brush rabbits, gray, medium sized, shy. One seems to live here. I have seen it nibbling the dandelions in my back yard and sunning at the edge of the road out front. I watch it from the windows, saying nothing to my dog. To Annie, rabbits are messed-up cats that need to be chased out. But our local rabbit is pretty good at scooting back through the fence to safety, quick as a bunny, you might say.

Sometimes the rabbits are not quick enough to escape the cougars and other predators that live in the area. I have sadly buried dismembered bunny body parts (which look alarmingly like chicken parts from the grocery store), not just because I love rabbits, but because I don’t want Annie to eat them. Since she considers the whole neighborhood her personal smorgasbord, it could happen.

Yesterday, we had just begun our walk, moving slowly because my back is out of whack again, when we came upon a dead rabbit by the neighbor’s mailbox. It was perfectly still, eyes open, no blood. Was it hit by a car?

“Oh no,” I said. “Poor bunny.” Annie approached it slowly, bending to smell its gray-brown fur. Just before her nose touched the rabbit, it jumped up and bolted into the salal and blackberries. Startled, I screamed and burst out laughing while my dog spent the next 10 minutes trying to find the rabbit. It was not dead at all, just “playing possum.” Apparently it didn’t see us coming until it was too late to flee, so it did the next best thing. It sure looked dead. Even Annie believed it.

Although we’re constantly told there’s big wildlife around here—cougars, bears, elk—on our daily walks, we see mostly the smaller things: garter snakes, newts, frogs, beetles and caterpillars. Many are smashed on the road. It’s a tough world out there. If the big cats don’t get you, a Ford 4×4 might do the job. 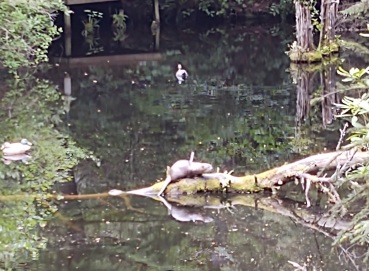 But there are exceptions. There’s a pond around the corner, an offshoot of Thiel Creek. Neighbors with a sense of humor have planted five wooden ducks there. The ducks bob around, couple up, and look pretty real for birds with no feet. One in a while, live birds drop in, including a blue heron. The other day, a river otter stopped by. I’m not sure how it got in or out, but I caught a picture before it took offense at my camera and dove into the water.

Birds—robins, Stellar’s jays, doves, sparrows, juncos, woodpeckers—offer musical accompaniment to our walks. In the spring, blue butterflies fly along beside us. At twilight, mosquitoes join in.

During this time of sheltering in place, Annie and I have continued our daily walks. While I’m fascinated by the wildlife, Annie is drawn to the people. We wave at folks passing in their cars or neighbors mowing their lawns. Children playing in the street rush up to pet the “doggie.” Older people stop to stroke her ears and tell her she’s a “good boy.” Why does everyone get her gender wrong?

A few adults have stood back, afraid they might catch COVID-19 from her fur. I stand at the far end of the six-foot leash, social distancing. Even though I don’t touch anything, I wash my hands like crazy when I get home. It’s sad to be so afraid. As we begin Phase 1 of reopening beaches and businesses on the Oregon coast this week, I hope we don’t see a lot of people getting sick. The tourist spots are already getting crowded. Meanwhile, those of us who live here are as scared as that rabbit that played dead yesterday. I’ll bet it didn’t come back out to the street for a long time.

Maybe a year ago, we had a possum playing dead in the back yard while Annie had a barking fit. Of course it was late at night. Of course I had to go out in the wet grass in my fuzzy slippers. The possum played dead so thoroughly I touched its fur—soft!—and it didn’t move. I dragged the dog in by the collar, gave her a Milk-bone and locked her in. Sure enough, in the morning the possum was gone.

If you’re getting cabin fever, go for a walk. Look around. Even in human isolation, we are not alone.

4 thoughts on “Bunnies and Beavers in the Bushes”