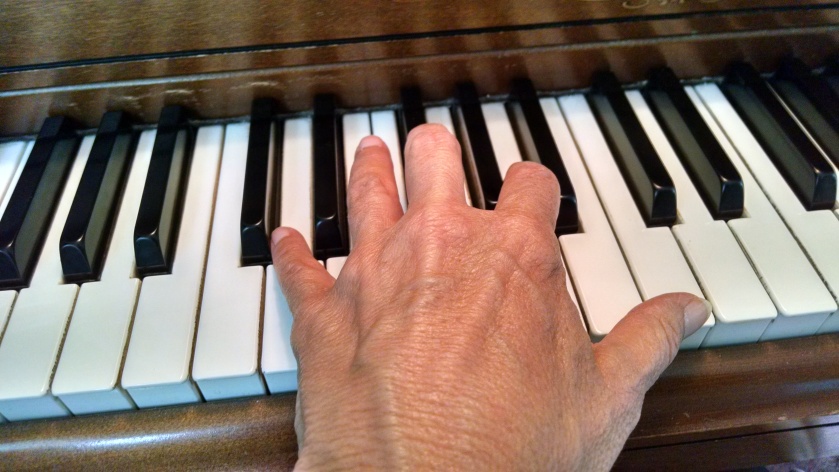 I have been AWOL here at the blog for a couple weeks. Another trip to California. Upcoming books to promote, music to play, dog to walk, bla, bla, bla. I have been working through some poems from a few years ago and would like to share this one with you today. Most of it is true. There are moments when I see myself sitting at the piano at Sacred Heart playing songs I learned in my childhood and I’m amazed. Without lessons or encouragement, I never stopped learning to play those 88 keys. I’m still learning a little more every day and grateful for the privilege.

Her mother says, “Go change your clothes,”
but instead she runs to the piano.
Climbing up on the stool, feet swinging
in her Oxford shoes with lace-trimmed socks,
she picks out the notes of the hymns
the sisters sang at catechism class.
“Ave, ave, ave Maria.”
“Holy God, we praise thy name.”
Her fingers half the size of the keys,
she finds the tunes and sings along,
grinning through the gap in her teeth.
“Stop that noise,” her father says,
turning on the baseball game.

But she cannot stop. She plays anything
that makes a noise—toy xylophones
and saxophones, plastic ukuleles—
and sneaks minutes at the piano when
her dad goes out to mow the lawn
or her mother leaves for the grocery store.
From a yellowed old instruction book,
she learns to clap out time and beats,
four-four, three-four, six eight,
quarter notes, half notes, whole notes
allegretto, andante, pianissimo.
Blocked by the family photographs,
she moves them to expose the keys.

At school, she finds the practice rooms,
a bench, a piano, an unlocked door.
But still she has to sneak. She’s
never had proper lessons, isn’t
authorized to be there, but
she’s drawn to it like a lover
she meets secretly at lunch,
then runs, breathless, to her English class.
One day, outside, a young man hears.
She blushes as he claps his hands.
When they marry, he buys a Wurlitzer
spinet, all 88 keys just for her.
He never tells her to hush, not once.

She’s widowed nearly a decade now,
but her wedding band shines in the light
as her wrinkled fingers dance,
playing the notes of the “Gloria.”
Her right foot pedals, beating time.
Behind her, the congregation sings,
one man in the back especially loud
and half a beat or so behind.
Leading the choir with nods and waves,
she smiles up at Jesus on the cross,
remembers that child with tiny hands
sneaking songs so many years ago,
because The Almighty told her to.

One thought on “Look for Me Sitting on the Piano Bench”