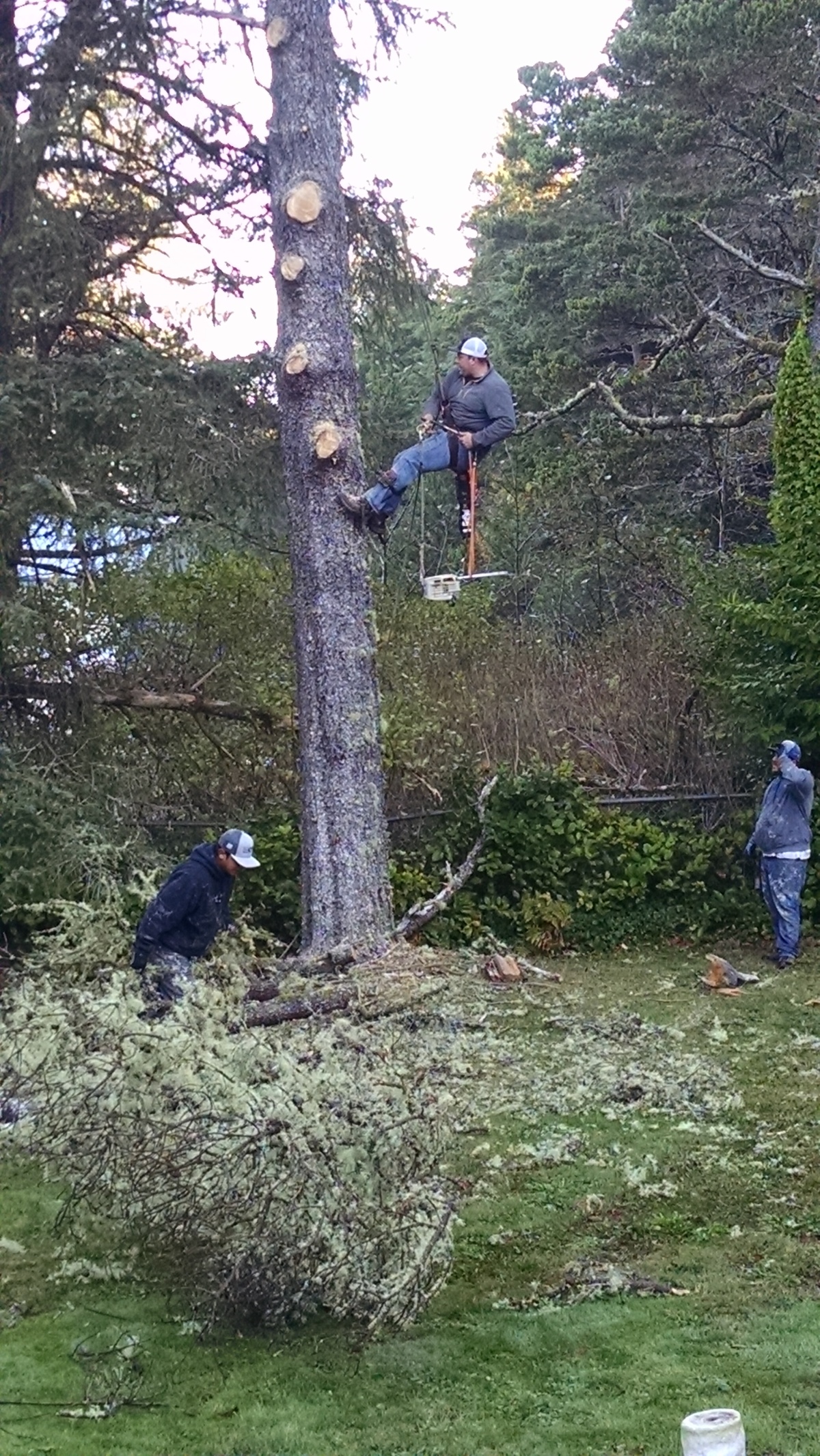 Chain saws roar in my back yard. Usually occupied by birds, newts, and the occasional rabbit, today it’s filled with people. Five workers from Oregon Coast Tree Company, four men and a woman, have trimmed the wild laurel off my fences and woodshed, opening up a six-foot-wide stretch to the sun. They’re cleaning up now, cutting last chunks of wood, raking leaves and scraps, feeding branches into the wood chipper. Kip Everitt is up in my giant Sitka spruce, cutting dead branches.

They did most of the work yesterday, leaving stark cuts all along the fence. Amputations. It’s not that I didn’t like the laurels. Their leaves were beautiful, with pretty flowers in the spring. They were home to birds, bees, and squirrels. I feel bad for what we had to do. But in the rain-soaked ground beyond the fence, their roots let loose, and the trees fell against the fence and the woodshed. Soon their weight would push these structures down.

The laurels had been leaning for a long time, some of the branches bent nearly to the ground but beyond my ability to trim with my loppers and my pole saw. I’m terrified of chain saws, of anything with blades. I have a bad back and funky knees. My arthritic wrists hurt just sitting here typing. These workers are young and strong. They pick up giant hunks of wood like sticks. They’re also fearless. They stand on roofs and fences and perch in trees, their chainsaws like extensions of their arms. Plus, they have the gear to deal with what they cut. It would take me years to dispose of that much wood.

And Lord, they are fast. In about four hours, they have transformed my yard. They have to be fast. They are booked two months in advance, interspersing painting, power-washing and other jobs between tree gigs. Things will not slow down when the winter storms start knocking down more trees.

I hear a “Woohoo!” as Kip drops a big branch off the spruce. It bounces on the lawn.

I love having this drama to watch out my office window. Soon the crew will be gone, and quiet will return. Annie and I will walk around the yard, absorbing its new look. For years, the area under the laurels has been covered with leaves. I gave up raking, declaring it a newt habitat. But now I’m thinking about planting something in the newly open space, a hedge perhaps, maybe rhododendrons. The newts have plenty of habitat outside the fence.

I don’t want to compete with nature, but sometimes I have to defend my space. Trees still surround my home like tall, wise guardians. With luck, they will remain standing when the big winds come again, and the robins will build new nests in the spring.

Happy Thanksgiving to one and all!

One thought on “Claiming a bigger piece of Oregon sky”

My Tweets
Join 695 other followers