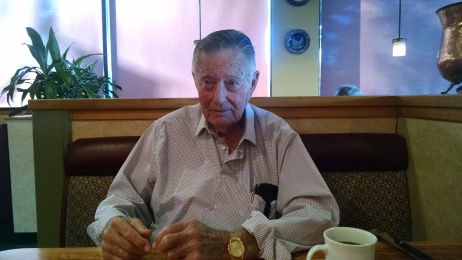 Meals with my dad, Ed Fagalde, are a slow process. It takes him forever to get ready to sit down, and if I’m not careful I’m halfway through eating before he’s finished adding condiments. Slow down, mustn’t rush, I tell myself. We’re going to be sitting here for a while. While I’m itching to check my phone or read a book, now it’s time to listen. Even at breakfast, when I’m still waking up, he stirs Sweet n Low into his coffee, clears his throat, and begins to talk. He’s still talking 12 hours later over ice cream at The Country Inn restaurant and a few hours after that, standing in my doorway while I’m getting ready for bed.

I believe part of the reason I’m a writer is the fact that my father and his father before him were storytellers. While the stories go on, you don’t take notes; the teller would become self-conscious. No, you listen. You nod and react and ask the occasional question while the words flow like a waterfall that never runs out.

Some stories are of modern times, tales of a frustrating visit to the bank or a friend dropping by. With these, Dad gets times and places mixed up, forgets names, and does not understand the computer-based modern world, but the stories of the past are unmarred by his 94 years. Usually, I’ve heard them before, but there are always new details. For example, the ranch house where Dad grew up was not always on the spot where I remember it. The house was moved from another location, with a new room and a porch added. I had no idea.

He’s surprised that I remember that house. I was 9 in 1961 when  Grandpa retired as foreman of the Dorrance ranch and moved to Seacliff Beach. I’m amazed to realize I’m now almost the age that he was then.

I remember the  barn, the house, the patio, the fish pond, the chickens, the smell of prunes in the dehydrator. I feel as if I remember so much more because of Dad’s stories: the rabbit pens, the blackberries, the acres of prune, cherry and apricot trees, the multi-national crews who worked in the trees and the packing sheds, the horses that waited for Dad to come home from school and feed them the peelings from his mom’s apple pies.

I can’t remember all that. I was just a little girl in mary janes and ruffled socks sitting politely in the living room while the grownups talked. I remember a wood stove, an upright piano, lots of clocks, Dad’s stepmother Rachel’s dachshund Gretchen. I don’t remember my dad’s mother, Clara, at all, but her spirit was still in that house. Last week while visiting Dad, I learned that she never had a washing machine. She washed everything by hand with a scrub board until she got sick and started sending the clothes out to be laundered. Imagine how dirty those work clothes must have been.

I learned that my grandfather, Clarence, decided to retire because the ranch owners had started selling off chunks of land to housing developers and he could see the whole thing disappearing soon, like so many ranches in what was to become Silicon Valley. When my brother came to visit last weekend, we took a drive down Dry Creek Road past where the house used to be. Now there’s a million-dollar house on the site next to many other million-dollar houses, all beige and decorator-furnished. Dad still recognizes the winding road between Bascom and Meridian roads and the giant Sycamore that marks the site of the old driveway. In his mind, he can still see the orchards, the irrigation ditches, the tractors and the packing shed, but I just see these houses and a tree that sparks my imagination more than my memory.

Dad tells about the boxes piled up on the dry ground that became infested with bees. When Grandpa tried to move them, he suddenly ran to the water trough where they dipped the prunes and dove in, covered with bee stings. He swelled up all over, but healed without going to a doctor.

He tells of signing up for the Army Air Corps, of training to be an airplane mechanic, of preparing to go overseas but not knowing where they’d be landing, of making an airstrip out of a road in Manila, of crashing at Leyte, of the guys he kept in touch with after the war. He tells the whole story of his career as an electrician, the different shops for which he worked, the jobs that stick in his mind, his long friendships with co-workers, his decision to retire.

He talks about his Fagalde grandparents, who owned a gas station and store at their home on Almaden Road near Branham Lane, along Almaden Creek. Grandma Lou, handy with a gun, always wanting to go shooting, Uncle Louie starting a business hauling gravel from the creek, Uncle Lloyd getting drunk and beat up, Grandpa Joe training his horses to come when he called their names.

My father talks and talks, as if he has to get it all out, has to tell me everything while he still has time. After he goes to bed, I make notes, trying to remember the details.

The stories go on and on. I feel like a bobble-head doll nodding as I listen. My eyes grow heavy with sleep and sometimes I nod off. When my brain screams stop, I push back my chair and start clearing the dishes. The talk temporarily peters out, but as soon as I sit down again, it continues. I fear the day when it stops for good. Meanwhile I do my best to soak it all in. I know what an important gift it is.

Sorry I missed posting the last two weeks. No Wi-Fi at Dad’s house. But I had some adventures while I was gone and will share them in upcoming posts.

Do or did your parents share their stories with you? If they’re still around, ask questions. See what happens.

My Tweets
Join 690 other subscribers