When I went to have my hearing checked last week, I had no idea I’d be walking out an hour later with hearing aids in both ears. I just wanted to find out if everybody was mumbling or I really couldn’t hear. 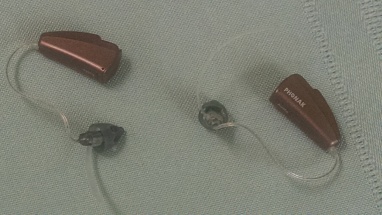 About 8 years ago, I had my hearing checked by the same audiologist, whom I had interviewed for the local newspaper. At the time, she saw a dip in the hearing in the right ear, but not enough to need hearing aids. A whole lot of life has happened since then. There are certain people in my life whom I just can’t hear. At the last two literary readings I attended, I couldn’t hear them read. It drove me nuts.

So into the booth I went. The doc placed heavy-duty headphones over my ears, blocking out all other sounds, then played beeps and boops at various volumes and pitches. I was supposed to say “yes” when I heard one. Often there seemed to be an echo of the sounds, and sometimes I didn’t hear anything for a long time. She followed the sounds with spoken words that got softer and softer.

A mild to moderate loss, she said afterward, pointing to a graph that shows normal hearing at about 20, mine at about 35, and 60 where it may ultimately go. Hereditary, she said. Thanks, Mom and Dad.

I sat there in shock as she told me about the types of hearing aids I could get and how much they would cost–$5,000 for two hearing aids–and oh by the way, they don’t take credit cards. Then she shifted me over to the hearing aid guy, who stuck these loaners on my ears and set about programming them. He told me about all the extra features I could buy. All the while, I heard what sounded like crickets. Part of it was my own voice whenever I said an S or a C. But eventually I realized the cricket sound I was hearing was the clicking of his computer mouse. Whoa.

I walked out into the world with new ears, the biggest part perched on the top of my ears, with little nubs inside my ears. It helped a little with hearing things I wanted to hear: voices, the TV, music on the computer, but my own voice sounded weird to me. Rustling papers, plastic bags, car keys and my dog’s tags were annoyingly loud.

When I played music, the piano and guitar sounded tinny and my singing voice sounded like I was singing into a tin can. Normally blessed with almost perfect pitch, I couldn’t hear whether I was singing the right notes or not.

Trying to talk to a friend in a crowd, I felt like I was a radio station that wasn’t quite tuned in. Plus my ears itched. Hearing aids take getting used to, I’m told. That’s an understatement.

As I walked around hearing every foot shuffle and mouse chirp, I made myself crazy trying to figure out where to get $5,000. When I talked to my dad, who at 94 has not gotten the hearing aids he most definitely needs, he said I didn’t really need them that bad. He thinks that because everything at his house is so loud my problem is hearing too much. If his next-door neighbor weren’t deaf, she could hear every word on his TV. In her house. In her garage on the other side of her house. So, no sympathy there.

The batteries on my loaner hearing aids died on Saturday night. I had hoped to use them at a meeting on Sunday. Oh well. I decided, for now, that I don’t need them. I will revisit the situation in a year. I’m still trying to grasp the news that I have a measurable hearing loss and it’s going to get worse. One shock at a time, right? Besides, most of the time, I’m at home alone where the quiet is a blessing.

I did some research on this whole hearing aid biz. A recent article in the New York Times said that nearly 30 million Americans, including two-thirds of those over 70, are said to have a hearing loss. But only 15 to 30 percent of those who would benefit from hearing aids use them. Why? Because the cost is ridiculous and rarely covered by insurance, and the results are not that satisfying.

My experience was not wasted. Now I know where I stand, hearing-wise. I also know how much I DO hear. I hear a lot. I can still hear the birds, the foghorn, the click my cellphone makes when I get a Facebook message, and my dog whimpering in her sleep when she has a nightmare. I can hear the voices of the people I love. Now that I know what’s coming, I’m grateful for every sound, even the trucks on the highway and the neighbor’s rooster crowing.

My Uncle Bob used to say his hearing aids let him hear the grass grow. Well, I listened and I didn’t hear it. I don’t think I need to.