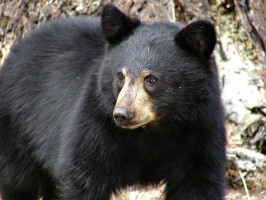 I was walking the dog recently when a car pulled up beside us. Luckily Annie was neither pooping nor jumping up on the car. The young woman driver rolled down her window. “I wanted to warn you that we’ve got a bear around here.”

She went on to tell me how something had been knocking over trash at the end of the street that crosses mine. The homeowner set up a camera one night and sure enough, there was a black bear.

A couple weeks ago, a friend who lives up Thiel Creek Road emailed me a video he had taken of a black bear eating apples off his trees. As he watched, it stood up on its back legs. It was TALL.

This weekend, my across-the-street neighbor hailed me over to tell me a bear had knocked over his garbage can. His wife had been cleaning out old spices and the bear was intrigued by the interesting smells. He didn’t touch my garbage. Apparently he prefers curry and oregano to grapefruit rinds and apple cores.

In my 17 years living here in the coastal forest, I have heard a lot about bears, but I have actually seen one only once. It crossed Thiel Creek Road in front of my car one afternoon. Since then, no bear. I have seen footprints, berry-laden droppings and flattened bushes where a bear might have slept, but no bears. So far.

Bears are definitely around. The Oregon Department of Fish and Wildlife says we have 25,000 to 30,000 black bears, the largest extant carnivores in Oregon. Despite their name, they aren’t always black. They can also be brown, blond or cinnamon. For food, they prefer berries, fruit, grasses and plants, but they will also eat small mammals, insects and amphibians. And they’ll adapt to human food if it’s offered.

Annie and I are always looking out for bears, as well as the cougars said to be in the area. I sing to let the bears know I’m there. If either one of us gets spooked, we abort our walk and go home.We stay out of the wilderness near dawn or dusk. Black bears are said to be naturally shy, but some have gotten used to finding food in people’s yards and gotten kind of pushy about it. Over the years, they have come after people and their animals. One even broke into a kitchen east of Yachats, a little south of here. So we’re not taking any chances.

Here at the house, a combination of chain link fence, barking dogs, and nothing worth eating keeps most furry animals out. We do have birds, newts, salamanders, garter snakes, mice and the occasional black rat. Moles have been actively tunneling under my lawn. But no bears. Maybe I need to put out better garbage.

My Tweets
Join 697 other followers