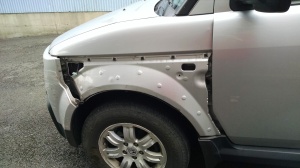 I was expecting to write a very different post today, but . . . life happened.

I was all dressed up and heading to Corvallis for a Timberline Review literary magazine event. Traffic on the coast was terrible. I just wanted to get out of Newport, which was flooded with tourists. I was on Highway 20, but still in town, when my phone rang. I know. I should have ignored it. But it was my dad, and I was afraid something was wrong, so I made a sudden turn into a parking lot to answer the phone. At least that was my intention. Bang, crash! I lost control of the car, hit something on my left and was headed for a fence. I did not know until the other car pulled in beside mine that my car had been hit from the rear. The driver was local, uninsured, and in tears. Her tiny black dog was hysterical.

The front of the passenger side of her car was smashed, the headlight in pieces, wires and such dangling, radiator leaking. My back bumper was damaged. But where did the piece of car lying on the pavement come from? Big piece. It took me a while to figure out it came from the front, where the real damage was, where I ran into a metal post.

People came running out of the nearby candle shop. Someone swept up a big pile of glass and car parts from the street. We were both shaken but apparently not hurt. Our air bags did not deploy (the recalled ones I didn’t have replaced yet). A fire truck came, followed by a police officer, crew-cut, shades and all. He filled out a report. I told him I turned abruptly. I was willing to take all the blame, but the officer insisted that the law says that if the other driver hit me from behind, she was following too closely, so she would be cited and I was in the clear.

My Honda Element is drivable, but it needs repairs. The estimate is $3,000, with possibly more showing up when they take things apart. I have Cadillac insurance. State Farm will pay for repairs and a rental car, and I will be okay (although my bumper stickers are toast.) The other car, an older Honda Accord, was towed to the same place I took my car. The woman doing my estimate looked out the window and said, “Oh, that’s totaled.” It’s not fair. It’s not right. I’m sure the other driver needs her car as much as I need mine, and I doubt that she can afford a new one.

My phone has a new name: “that f-ing phone.”

It’s a knee jerk reaction for me. Phone rings, I grab it, I look away from the road to see who’s calling, and if it’s family, I answer it. Not anymore. I’m turning the phone off when I drive so I won’t even know if anyone calls.

It happened so quickly. I sometimes think about what I would do if I were about to get in an accident, how I would try to protect my face or my hands. But there was no time for a thought or a word. I just knew I was hitting things and had to get away from the fence that was coming right at me. Since then, I keep hearing the crunches and seeing that fence over and over in my mind. Driving scares me now.

When I was done with cops, insurance and repair people, I called my father. He gave me a good tongue-lashing. I deserved it. “Let the damned phone ring,” he said. “Call back later.” It turned out he was fine, just calling to see how my medical tests had turned out. I get those results this afternoon. Fingers crossed.

Today I am aware of how blessed I am, so blessed I feel guilty. I’m not rich, but I have enough. I can afford a nice car and good insurance. My body still works as well as it did before the accident. I can still write, play and sing my music, walk the dog, and go to lunch with my friends. Not everyone is so lucky.

Dear friends, turn off the phone. It’s not just texting, it’s telephone calls, email, checking the weather, fiddling with the GPS and all the other features on our Smart Phones. It’s hard to resist their allure, and you cannot safely use the phone and drive at the same time. When I slowed to turn off, I didn’t even know there was anyone behind me. I didn’t look. My attention was completely on the phone. Smart phones are smart, but sometimes we people who use them are idiots. A phone call can always wait. Always. Minus the phone, I would have spent my evening eating hors d’oeuvres and listening to poetry. Instead I was filling out a report for the DMV. It’s not worth it.

Next week, I promise, even if the house burns down, God forbid, I will offer a blog full of happiness and beauty. Or dog pictures, which are the same thing.

Leave me a message at the beep.

Her books include Stories Grandma never Told, Childless by Marriage, Shoes Full of Sand, and Up Beaver Creek. For more about Sue, visit http://www.suelick.com or contact her at sufalick@gmail.com.

Note: All contents copyright Sue Fagalde Lick 2019. Do not duplicate or reuse this material without my permission. Excerpts and links may be used, provided that they are clearly identified and link back to the original content.