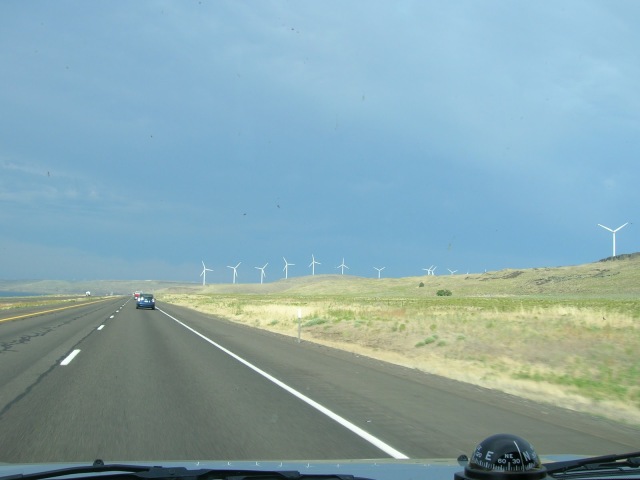 I sometimes have this fantasy image of me being an adventurer, traveling all over in my Honda Element, experiencing new people and places, camping out in the wilderness, unafraid of anything. Just me and the open road.

What a crock. Last week, I drove from one side of Oregon to the other for Fishtrap, a writers’ gathering at Wallowa Lake, near the town of Joseph in far Eastern Oregon. A big chunk of the trip took place on Highway 84, along the northern rim of Oregon along the Columbia River in what is called the Columbia Gorge.
About five miles west of Arlington, I was passing windmills atop mountains that looked like they had been cut with a knife, with the river to my left. Suddenly, a piece of my car came off. It sounded like something hit the car. I kept hearing noises, so I got off the road, got out, looked around at the tires and sides of the car and didn’t see anything except a black smudge on the door. I figured a piece of tire from the road had hit me. It was at least 110 out there, a hundred miles from any town, no other cars around, so I got back into the air-conditioned car and drove on.
A little farther along, I heard something banging the car. It got louder and louder. Then I saw something dark blowing across the windshield. I pulled off again. I saw a long piece of rubber hanging from the roof. I had no choice but to pull it all the way off. I didn’t know what this was going to do. If it held my windshield in, I was screwed. Now I had melted black rubber all over my roof and all over my hands and arms. It looked like tattoos. There was nothing I could do but toss the rubber on the floor and drive on.
The river was still to my left, but it was a harsh-looking territory. Brown, sharp-edged. Dead animal in the middle of the road. Arlington went by in a blink. How could anything except snakes live here? I’ll bet Lewis and Clark said, ”Oh shit, this is bad” when they came through the east end of the gorge. Ominous. Clouds. The rubber thing smelled like cow poop.
Finally a rest stop where I could check the damage. The rubber strip had been holding the top of my windshield, so now there was a gap between the windshield and the roof of the car. I worried that when it rained, the water would come into the car. I also feared that my windshield would get loose and fall out. But what could I do about it out here?
Just past Boardman, another blink, it started to rain. Then a sign said, “Blowing dust next 40 miles.” That’s what the haze was. Damn.
Then I was driving through a dust storm. Wind pushed at the car, and it was hard to see. Tumbleweeds three feet in diameter came at me across the road. A lot of tumbleweeds. Then rain, big hard attack rain and lightning. Oh my God, oh my God, oh my God, I chanted. The tumbleweeds were coming at me like bombs. I was afraid to use my windshield wipers but had to. Thank God, the window held. Nothing was coming in. Yet. It was getting late and dark. If I could just make it to Pendleton and if I could find a motel with a vacancy . . .
I started thinking maybe I should just take tours, even though I hate people telling me what to do and I hate riding buses.
Why didn’t I at least make reservations?
Oh crap. I got a blast of dust, rain, wind and lightning all at the same time. I passed a sign that said if this light is flashing check this radio station for weather info. It was not flashing.
Ten miles to civilization.
Ah, Pendleton. A guy in a Nissan sped by as if nothing was going on. Attractions sign: Pendleton woolen mills. Lodging, exit 207. Almost dark.
The raindrops were thick, like sleet, but my windows felt hot to the touch.
So far, nothing was coming in.
So, Pendleton. Exit. Businesses, stores, houses, a Travelodge somewhere down the road. I followed the sign. When I saw it in the middle of the silent Sunday night town, I thought, Oh Lord. It had the seedy look of those places very poor people rent by the month. But I didn’t want to drive another inch, so I parked, walked around the building until I found the office and discovered a normal-looking lobby, complete with a young Indian woman, last name Patel, at the desk. “How was your drive?” she asked.
“Crazy,” I said.
“Well, it’s been pretty hot today.”
“How hot?”
“115.”
“That’s pretty hot,” I said, feigning calm. But I was thinking, “115! One hundred freaking fifteen degrees!!!!” It didn’t feel that bad then because the wind was blowing half of Pendleton from one side to the other and attack rain was cooling things down. But 115! Any thoughts I had of checking out historic Pendleton were replaced by thoughts of “I’ve got to get out of here” and “Please Lord, don’t let it be that hot where I’m going.”
It was.
But I’m happy to report I had a good time. Fishtrap worked its spirit-healing magic, and the drive back was considerably more mellow, although the wind was so hard at one rest stop that I had a hard time opening the door. I’m actually planning to go back sometime. There is so much to see, especially between Portland and The Dalles, so much history and nature to explore. But not yet.
In the early part of my trip, I was reading Robin Hemley’s Field Guide to Immersion Writing. I was in the section about travel writing, and I supposed I was immersed in it right then. Perhaps that’s what this is, immersion writing. Me and my long strip of rubber coming off the car in the middle of the Columbia Gorge. For now, that’s about as much adventure as I can stand.

My Tweets
Join 694 other subscribers