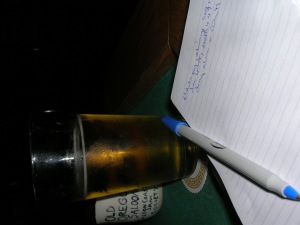 If she weren’t already dead, my mother would die of the shock. Her daughter is sitting in a Lincoln City bar alone, drinking beer, talking to drunk guys. I must be insane. But it’s all for a story. I’m writing about jam sessions in Lincoln County. It turns out most of them are in bars.

When I pull out a notebook and camera, guys swarm. “You’re a writer! Write about me. Take my picture. Have I got a story for you.”

I want to seem cool, even though my music is more church than Clapton, so I order a beer. A third of the way through one glass, I feel drunk. Enjoying the glow, I sigh and settle into my chair, even though when the music starts I’m afraid I’ll never hear again. I haven’t heard that kind of loud since high school dances in the ’60s. When the drummer hits the drum hard, I literally leave my seat. But I’m trying to be cool. A drunk guy with a bandanna and tattooed arms, comes out, says, “I’m Kerry. What’s your name?” He has glazed eyes, missing teeth. I’m old enough to be his mother, but apparently it doesn’t show yet. “Hi, I’m Sue.” I’m relieved when he wanders away.

A long-haired guy named Mike comes over, shakes my hand, tells me he’s a music teacher, but all I see is a wasted baby boomer who looks like a lost member of the Grateful Dead. When he plays his guitar, he goes into a trance, and my ears bleed. If I were home, I’d turn it off in a hurry. But I joke with the band, take their pictures and tells them I love their music. I decline their offers to let me sit in. I don’t even know how to play an electric guitar.

On break, Mike talks to me, tells me he has twin daughters back in California. It turns out we lived in the same area, went to the same bars 40 years ago when I was learning that my ex liked to drink too much. I have almost forgotten my recent dead husband for a while, despite weeping into my dog’s fur when the clock struck 12 on New Year’s Eve, a mere 16 hours earlier.

Late afternoon on New Year’s Day, the bar is full of men in baseball caps, just a few women.There’s this young blond guy, curly hair, drunk out of his mind, barely able to sit up at the bar. A wizened old guy in a cap too big for his head, gets up and dances stiff-legged in the middle of the floor. It’s getting dark, and I know I’m not going to get a lot of usable quotes here. I sip at my beer, knowing I should leave. I’m getting drunk and have a long way to drive. I still have other bars to check out, all in the interest of a story.

Three nights ago, I visited a pub in Yachats. Pouring rain, winds threatening to push my car off the bridges, but I had a story to do. Another jam, another beer, better music, more drunk people wanting me to write about them.

Now I spray my mouth with Binaca and head south to Newport to visit jams at Harpoon Hannah’s and the notorious Bay Haven. I’m relieved to find that Hannah’s is closed, a For Rent sign in the window. From the corner, I can hear the music coming out of the Bay Haven. Okay, I have to at least look inside. I stand in front of the wooden door with its sign that says, “No minors permitted on these premises,” pray for protection, and go in. This time, the band is so into their music they don’t have time to drink or hit on strangers with notebooks. Here at last is a real jam. Except for one wasted woman in the corner, everyone is here for the music. As I take my last pictures of the day, I think I might come back sometime. The music is good, the old wooden tables are inviting, and there’s something about a bar that makes everything outside go away for a while.