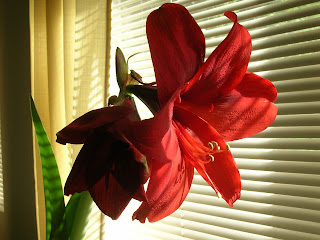 At my birthday party a couple weeks ago, a friend handed me this incredibly ugly plant. It wasn’t from him, he was quick to point out, but from another friend who wasn’t there.
This plant was three feet tall and about five inches around, held up by a green metal stake. I thought: What use is a plant that needs its own little crutch to stand up? I already have relatives like that.
Anyway, it had two leaves and one stalk holding what might turn out to be a flower. I was told it was an amaryllis.
Where would it fit in my house? Nowhere. But of course I said, “Oh, thank you. Wow.” Does this friend not know me at all? My plants are like me, short and squatty, and they have to be tough to survive. I’m glad the gifter was not there. I don’t have a poker face. My mouth was saying “Oh!” (happy) while my eyes were saying “oh” (dismayed).
Could I accidentally forget it? My friend made sure it went home with me. When I tried to get it in the car, it hit the doorframe. When I got it leaned back against the seat like a passenger, my dash lit up, saying, “side airbag off.” Yeek. This plant needed a car seat of its own.
I had one of these tall skinny plants before. Somebody sent a kit. You put this thing in this pseudo-dirt and water it. I did. Two leaves sprouted up. They grew and they grew and they grew like the plant in “Little Shop of Horrors”. I had two ridiculously long leaves, but it never ever blossomed. The leaves kept growing until one day they got so heavy they fell over and turned brown. We said, “Oh good, it’s dead,” and threw the plant out.
Now I have this one. At the party, the resident cat kept sniffing the dirt (is it dirt?) and started gnawing the leaves. At home, I have to hide it where the dog won’t eat it, thinking it’s celery. Someplace where nobody will see it.
I have minimal luck with houseplants in general. I mean I had to ask whether this one goes outside or inside. My friend Pat mouthed “inside.” Pat is the one who noticed my pot full of dead leaves, said, “Oh this needs some love,” plucked off the leaves, gave it some water, and by the next week it looked like a new plant. All I do for my plants is throw water on them. I buy plant food, but it rots, forgotten under the sink.
When the leaves fell off a big plant I inherited from my mother-in-law, I had to take a picture and put it on Facebook to find out what it was and what to do. Oh that’s a bla-bla-bla, people said. Water it, put it in the sun, and say a prayer. It survived. Who knew? I thought it was dead.
When people give me a plant, it’s like, “Oh, that’s nice.” It will last a week or two longer than cut flowers. I’ve got an African violet dying in the pot right now. I feel so guilty.
I don’t even handle cut flowers properly. Pat noticed there was no water in the vase holding my get-well flowers a while back. She shook her head and added water. Did I sprinkle in the food or preservative or whatever that powder was that came with it, she asked. No. Was I supposed to? I make her sigh a lot. I just stick my cut flowers in a vase and leave them on the table until all the petals fall off.
So, when I got this three-foot-tall strange-looking plant, the plant lovers in the crowd oohed and ahhed while I thought oh no. But maybe I was wrong. This thing is damned tall. In fact, I think it has grown another foot since I brought it home. And guess what? It bloomed. Two gorgeous red flowers appeared a few days after my birthday. They were so heavy the plant fell off the table, but it survived. In fact, I think another flower is on the way. Maybe this relationship will work out after all. Maybe this plant will live forever. And bloom . . . exactly. . . once.