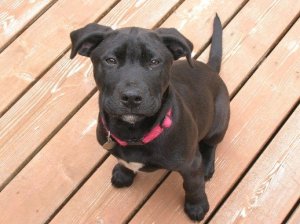 My dogs Chico and Annie were born at a home down Thiel Creek Road just past where the road forks, one way going uphill through fields of Scotch broom, wild blackberries and a rainbow of wildflowers, the other meandering downhill along the creek, bounded by ferns and fir trees. Usually we walk the upper path. It’s sunny and not so steep, but yesterday I took Chico down the lower path.

I hadn’t planned to take him to his birthplace. I’m pretty sure he doesn’t remember the house. He and Annie were only eight weeks old, 9 and 8 pounds of scared puppy, when Fred and I put them in the car and took them home that rainy April day last year. We had never had any contact with that family since then, and I don’t even remember their names.

But this time, the woman came driving by with one of her daughters. She recognized me and the dog and stopped to talk. “He looks just like his mother,” she said. Really, I thought, gazing at my dog. Perhaps. The mother dog, a Staffordshire bull terrier, was rounder and more mottled black and tan while Chico, half Lab, is primarily black. However, this summer his fur is lightening up, with more brown showing every day. And those eyes, those huge chocolate eyes, are unmistakable. Chico’s taller than his mom was, like a woman’s teenage son.

“Is he fixed?” the woman asked.

“Oh yeah,” I said, thinking about how my brother-and-sister pets were already humping each other at four months and I was relieved to have them neutered before Annie wound up pregnant.

The woman drove on after that. Later I wondered if she had thought maybe Chico would be a good stud for breeding. No way. Two crazy dogs is enough.

Having gone that far and been sighted by the human mother, we walked toward the house. We were still a couple hundred yards away when I heard a dog barking like crazy from the garage. I was sure it was Chico’s mother. While he didn’t recognize the blue house, he did react to the voice, head cocked, ears up. “Mom?” He didn’t bark back, but I could see he was puzzled.

I felt bad for the dogs, separated for life. “He’s okay,” I called out to the hidden mother dog. “Big and healthy. I’ll take good care of him. I’m so sorry.” And we turned and headed back up the hill.

It was a long walk home. We collapsed on the cool lawn, Chico leaning all his 64 pounds on me as I pet his soft brown-black head. “You’re such a good boy,” I said, wrapping my arms around him and hugging him tight.