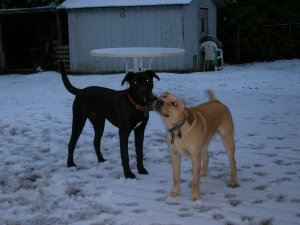 I have never seen so much snow falling in my life. We live on the Oregon coast, near the beach, at sea level. Before we moved here, we came up in February for the annual Seafood and Wine Festival. It was snowing then, but lightly, and everyone said, “Oh, that never happens.” Wrong. It seems to snow more each year. The above picture was taken Sunday morning, before the heavy snow came. The dogs had a great time sliding around and eating chunks of ice. Now everything is solid white, it’s about 25 degrees, and the dogs are huddled together on the big green chair in the living room.

Thank God I did my singing in Nye Beach on Saturday when it was merely cold. I woke up Sunday to the so-called “Winter Wonderland.” I have learned over the years that it’s only a wonderland for skiers and characters in fairy tales. Those of us who need to work in it, drive on it or who have broken heaters don’t enjoy it so much.

Yesterday I made it to church during a lull in the storm, zipped to Fred Meyer’s to buy a few last Christmas gifts and made it home just as the snow started to fall. I spent hours looking out the window, amazed. So much snow, so thick. So beautiful. But this California kid keeps thinking, All right, I got my photos. Enough already. There’s some blue in the sky, and it is absolutely gorgeous out my window, but we’re afraid to go anywhere because everything is turning to ice and expected to stay that way for several days.

Now I know you folks who live in real snow country are thinking, big deal, a couple inches for a few days, but we Silicon Valley expatriates are not wired for snow. I don’t have chains for the new car, and I forgot to wrap the pipes. Mostly I worried about the dogs turning into pupsicles in the laundry room where they sleep.

Up in Portland, where the weather is worse, our son Michael rode his bike to the store. He only crashed once, he said. Unfortunately, he was carrying his groceries and watched his milk trickle one way and his hot chocolate the other. Oh well. He’s young. He sent photos of snow angels.