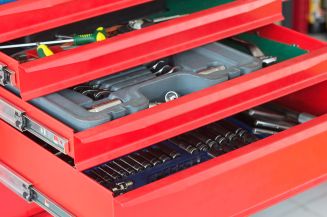 Kitchens are for girls, garages are for boys. Girls sew, boys saw. That’s the way it was when I grew up. While I was in the home economics class learning how to poach eggs and set a proper table, the boys were in the classroom next door learning how to take apart an engine and make small wooden shelves. While Mom helped me with my knitting, Dad showed my brother how to change the oil on the Buick.

That’s the way it was back in the ’50s and ’60s when I was growing up. Girls needn’t worry their pretty little heads about so-called men’s work. The man of the house would do it.

Bull pucky. What if there is no man? Or what if a woman wants to do it herself? All she needs is the skills. God, I wish there was a shop class I could take now.

Last week, I installed a new toilet seat. I took apart my sink to unclog it. My pellet stove requires constant attention. With my husband gone, no kids, and no money to pay someone, who else is going to do these things?

It has been a week for mechanical difficulties. On Wednesday, seven days after I came home from my trip to San Jose, I realized my “landline” phone had not rung in ages. I don’t get a lot of calls, but this seemed strange. I tried calling myself with the cell phone. My phone started to ring then cut off. Being me, I did this about seven times before I decided I had to call the phone company.

Yesterday, a nice man spent two hours here checking all my phones and wires. He had to get at all five phone jacks, which meant moving my dresser, crawling under my desk, and getting right in the middle of my mess, while I watched, helpless and embarrassed. I could have done most of what he did.

In the end, he fixed a short in the wires and determined that two of my five phones were dead. I sang “Taps” and put them out for the garbage, then pulled ancient “princess” phones out of a drawer and watched him plug them in. I put “buy phones” on my to-do list. Why does one person have five phones? Part of it is that with my fading hearing I can’t hear the phone ring if I’m not nearby. Part of it is just that once upon a time there were more people here.

The phone guy was observant. He asked about my guitars. He commented on the giant Styrofoam image of Fred from his retirement party. He talked about his own retirement plans. I kept talking about “we.” “We” had two businesses, “we” moved the phone jacks. I never mentioned that “we” is just me now. He might have figured it out from the shrine in the bedroom.

After he left, I set out to work on the lawnmower. Last Friday it worked fine while I mowed the front lawn. Since then, it huffs and it puffs, but it won’t start. I tried adding gas, checked the oil, turned it upside down and shook it, unscrewed the top and stared inside, and watched a video on YouTube. Okay,  the problem could be fuel, compression or spark plug. I decided the spark plug was the culprit. Apparently you’re supposed to change them once in a while. Timidly, I pulled off the rubber do-hickey and exposed the white end of the spark plug. Now, how does a body get that thing out of there? And what is this business about “gapping?”

Too much. I walked across the street to ask my neighbor. He wasn’t home, but the dog was overjoyed to see me. Unfortunately, the dog does not have hands.

A YouTube guy with a long beard and southern accent described the process. You get your 3/8 ratchet and your 13/16 socket and pull out the plug and . . .

Somewhere in the garage were sockets and ratchets. I opened drawers till I found them lined up in their little boxes like my crochet hooks in different sizes. But which one is for spark plugs?

Later. It was almost time to start making dinner. It was going to rain soon. I still had a section of jungle I needed to weed-whack. I pulled out the weed trimmer. It hummed, but it didn’t cut. I checked the string. How different is it from thread in a bobbin? Not very. I straightened that sucker out, pushed the switch, and shouted in jubilation as the weed parts flew. No wonder guys like power tools. I cut and cut, even when the rain started pelting my hair and darkening Fred’s old green shirt. I finished the job and went in to make dinner.

I pulled a package of rolls out of the freezer. The bag broke. Bread and sesame seeds littered the floor. Seriously? My language scared the dog.

Yesterday, I conquered the weed-whacker. Today I will conquer the spark plug. If I can change a guitar string, I can do this.

Men, share your tools with your wives and daughters. We’ll show you how to bake a cake and run the vacuum cleaner. Women, go out to the garage and refuse to leave until the guys show you how to do what they do. Don’t just bring them a beer and go back to the kitchen. You need to know this stuff.

I welcome your comments.

My new novel Up Beaver Creek is coming soon. The interior pages are complete, and the cover is in progress. It will be available next month. Meanwhile, check out my Amazon page for other books you might want to read. I’ll be outside working on the lawnmower.

Last week I was whining about the dead hydrangea bush I was having a hard time removing. Actually “hard time” is putting it too mildly. I dug and chopped and pulled at that thing for weeks. I kept coming back to it like a dog trying to get at a rat under the house, digging and pushing and bending, nicking up my piano-playing hands. It was thoroughly dead, its branches turned to bamboo. I blame the freeze of 2014, plus the blackberries that grew up around it and choked it to death. I had given it two whole seasons to recover, but it didn’t.

Two weeks ago, I saw that this job was getting too big for me and contacted a gardener. After a week, he had not responded, and it was bugging me, so I dug and chopped and tugged some more as my good shoes got crusted with mud. The branches that were too thick to cut kept scratching me. I went at it with a hatchet. The branches laughed. I tried to cut it with my loppers. Nyah, nyah, they said.  I gave up for a while, but I’m not one to quit on things. I did a search on YouTube and watched a guy named Bob demonstrate the proper technique. Okay, I can do this, I thought. I didn’t own the fancy spade that he had, but I did own a spade.

It was working. Then I got down to the last mega roots, thick as parsnips. I chopped with my hatchet. I dug with my spade. I grabbed and pulled with all my might. I could hear roots popping. Progress. But then with one of those mighty heave-hos, I heard my back popping, too, and thought, uh-oh. Time out.

I threw myself on the grass in a sweaty savasana and let it go. It was hard. I knew I was close. I also knew I didn’t want to end up in the hospital.

The gardeners finally contacted me on Monday. They would charge $40 to get the plant out. Fine. Late Wednesday afternoon, they came. Three guys, two speaking mostly Spanish. One of them grabbed my rusty spade that was still leaning up against the wall. He shoved it down into the ground hard about three times, pulled on the plant and it came out, roots and all. Just like that. He carried the corpse to the truck. They smoothed the dirt, and they were done.

I was so close! I almost had it. Just a little more upper body strength and it would have been my victory. It should have been. After all, I am the founder and CEO of Blue Hydrangea Productions. That was my glorious standard for my company. I loved it when it was blooming and I should have been the one to perform the final rites. But no. Because I’m a freaking girl. I thought they would bring fancy equipment to dig and cut. Wrong. They used my rusty old spade that I found in the shed after I watched the YouTube video. Not fair!

Two minutes! They should have paid me for doing all the prep work. I should have had Annie help me. If that dog can bite through an allegedly indestructible Kong or a log from the woodpile, why can’t she take down a dead hydrangea?

Everybody says I should have called them in the first place. They also say I need to hire a gardener. Mowing the lawns kills me. My lawn is like a golf course. Huge. But there’s wonderful satisfaction in watching that lawn get neater with each row I cut. So, not yet.

Any day now, I’ll be planting a new blue hydrangea, all by myself. And I took down a dying rosebush yesterday in five minutes. Thank you, YouTube.