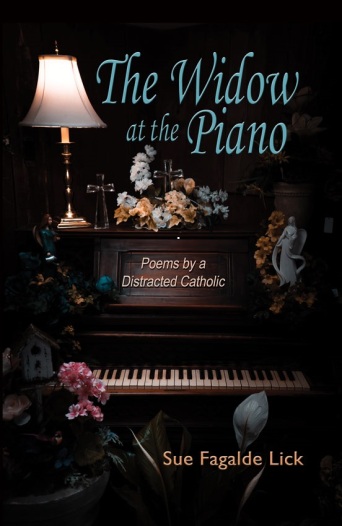 With most churches are closed due to the COVID-19 crisis, many are offering online services. At St. Anthony in Waldport, Oregon, I was part of the music team on Saturday for the Mass we videotaped to be put online Sunday. I played piano and sang, Stella played guitar. We had one reader, one server, and three real parishioners with photos of the rest taped to the pews. It was as normal as it could be under the circumstances. You can watch that Mass here.

When Sunday came, I had already attended the St. Anthony Mass, plus I didn’t want to watch myself on the screen, so I chose a different church.

Why not go to the top? Archbishop Sample led Mass at the cathedral in Portland at 11 a.m. Very holy, very formal, trained singers, beautiful statues and paintings in the background. In person, I would have dressed up and been on my best behavior. But having gotten up late, I was sitting at home in sweat pants and tee shirt with unbrushed teeth and no makeup. I was still drinking my tea from breakfast, and I was surrounded by distractions. I wanted to go through that pile of papers on my desk. I wanted to check my email and Facebook. I wanted to get up and walk around. You can’t do any of that when you’re sitting in a pew at an actual church surrounded by other people–or when you’re sitting at the piano in clear view of the priest and everyone else.

Nor can you offer commentary. I can’t help myself. My new chapbook of poems, The Widow at the Piano, is subtitled “Poems by a Distracted Catholic” for good reason. With no outer filter, my mind squirreled all over the place.

Why are they wearing rose-colored vestments; it’s still Lent. But they sure are pretty.

Why does the archbishop keep changing hats?

Who is that guy? Is he a deacon?

Is there a quartet in there? Social distancing!

The archbishop sure has a nice singing voice.

Oh, look at all those empty pews.

Hey, “amen” is the same in both languages.

Ah, tricky, they put a painting on the screen while they received communion, so we won’t feel bad.

That sure was a short song.

Should I be kneeling or something?

Oh, it’s over. No closing song?

Well, that was nice, but I don’t feel like I’ve been to church.

So it goes. A week ago Sunday, I attended two full Masses and portions of Lutheran and Presbyterian services. During the week, I said the rosary with the Archbishop and watched Pope Francis preach in an empty St. Peter’s Square. It was raining. The cantor held an umbrella over himself and his music. The pope spoke Italian with a woman translating in English. I kept trying to understand the Italian. The pope seemed to be limping pretty badly. I was relieved when he finally sat down. But it was nice to be there without the crowds.

Maybe I’ll try the Portuguese church in San Jose next week. Why not?

There’s religion all over the net, and I am so distracted.

Speaking of distractions, I was supposed to do my first reading and my first book-signing for the new one last week. Both were canceled. I’m afraid my poor books will just disappear. I had hoped to publicize both The Widow at the Piano and my other chapbook, Gravel Road Ahead, which came out last October, together. Now . . . piffle, as my late husband used to say.

I’m not the only author in this fix. Spring is book-launch season, and many events have been knocked out by the virus. Readings, signings, talks, workshops, conferences, all canceled. What should we do? Just wait? But here are these lovely books. I am going to try to record some of the poems and share them online. Stay tuned.

I’ll give some books away, too. For the first 10 people who are willing to read and post about The Widow at the Piano or Gravel Road Ahead on your blog, at Goodreads, or on Amazon.com—or all three, I will send a free copy of the chapbook of your choice. Email me at sufalick@gmail.com if you’re interested.

Meanwhile, I’ll keep seeking religion online. I can’t guarantee that I’ll behave while I’m watching. Maybe if I could do it with a group, I’d be more reverent, but oh yes, we can’t congregate. Have you tried going to church online? What is it like for you? Or are you just going to commune with God on your own via meditation or time spent in nature?

Neither of my grandfathers were regular church-goers, but they were good men. For Grandpa Fagalde, all those hours he spent fishing, staring at the ocean, may have been church enough. Grandpa Avina might have been listening to San Francisco Giants baseball games while the women went to church. Whatever works.

Stay well. Do the best you can to avoid getting sick, but don’t make yourself crazy. You cannot sterilize the entire world and everything in it.

Yet I look out my office window and see the same trees and the same sky I see every day. I see my tulips and daffodils blooming in a riot of red, yellow and peach. I see a family of robins pecking at the lawn, which has grown lush and mossy from winter rain. Inside, it’s quiet except for the hum of the gas fireplace pouring out orange heat. My dog Annie dozes on the love seat. I’m not quite dressed yet, but there’s nothing unusual about that either. I have all day, no appointments, nowhere I have to go. If I stayed disconnected from the media, I would not know this was anything but another beautiful Oregon coast spring.

We have not been hit as hard here as other places, not yet. As of this morning, Monday, March 23, we have 161 known cases of the virus and five deaths in Oregon. But everyone knows these numbers are going to go up, way up. No one has tested positive here in Lincoln County, but very few people have been tested at all.

To the dismay of those Oregon coast folks trying so hard to stay apart from others, tourists, mostly young people, have come to the beach in droves, seemingly ignoring all the pleas to stay home and “shelter in place.” Some of the beaches up north have blocked access. Gov. Kate Brown is expected to close all the state parks today, on the premise that if they have nowhere to go, the visitors will go home. But that means we who live here can’t go to the parks either, and that hurts.

While I’m somewhat used to being alone, many are having a hard time with the isolation. My friend Bill is one of countless numbers who live in an assisted living facility, nursing home, etc. The residents are confined to their rooms. They are not allowed to go out, and visitors can’t come in. Their meals are left outside their doors. Sounds like prison to me. And yet, because they are the most likely to die if they get this virus, what choice is there?

Many folks who are not used to staying home are already experiencing cabin fever. I’ve got to admit I’m better equipped for this than my friends and relatives who are always on the go. Most days, I’m here by myself anyway. I’m just sticking to my routine—write until about 3:00, walk the dog, do chores, play music, watch TV. Same old, same old, except I can’t go out to lunch, and God knows I do love to go out to lunch.

Last week, I wrote this cheery post about surviving at home alone. Well, proving I’m human, that night I was singing a different tune when I got word that all of the Catholic churches in western Oregon were closed. No more Masses, potlucks, meetings, or Stations of the Cross. We wouldn’t even celebrate Easter together. I cried like somebody had died and then posted on Facebook about how lonely and miserable I was. My church was not only my spiritual home but my main social outlet.

But there’s good news in all of this. In response to my Facebook post, friends called and texted, and we connected more than we ever had before. Paying it back, I have been phone-visiting people, especially people I know are home alone, and we have had great talks. I’m experiencing more human connection than usual. I wish this virus had never happened, but I do see some good things coming out of it. I urge you to reach out by phone, email, letter, Facebook or whatever.

As for church, Fr. Joseph Hoang, our pastor at St. Anthony’s in Waldport decided he would videotape weekly Masses. Three of us did music for the first one. “Red” was altar server while his mom “Ice” operated the camera. We taped photos of the parishioners on the pews so we all felt less alone and Fr. Joseph had someone to preach to. I think we all got nervous with the camera on us, but it was wonderful.

Yesterday, I found countless church services online. I could “go to church” all day long. As it was, I attended two Catholic Masses and dropped in for parts of Lutheran and Baptist services. As the Internet keeps going, the possibilities for new types of connection are unlimited. What a gift. Back in the flu epidemic a hundred years ago, people were truly isolated. No TV, no Internet. Many didn’t have telephones yet. At best, they could write a letter or a send a telegram.

I worry about the same things as everyone else. How long will this go on? Will we not be able to get food and other necessities? Will people turn on each other? Will we break the Internet with everyone trying to work and go to school online? How many businesses will fold, and how many people will lose everything? More important, how many people will get sick and how many will die? Will it hit my loved ones? Will there not be enough doctors and nurses to help them? Will I get it?

Just a few weeks ago, we were living normal lives, and the news was all about Democrats and Republicans. My advice from last week stands. Turn off the TV, radio and Internet as much as you can. Connect with each other as much as possible. Get outside in nature. Find a project to pass the time. Pray. It will be over someday. Only God knows when, but it will.

How are you doing in this crazy time? Feel free to share in the comments.