I didn’t see the no-trespassing sign until I had walked across the decaying platform, feeling the wood give under my feet as I snapped pictures of the old Yreka Western Railroad station and the abandoned train cars covered with graffiti. The sun was about to set, and there was no one around. I had had a long hard day and should have been relaxing in front of the TV at the Best Western instead of wandering around alone.  I considered ever so briefly that I might break my neck, but the writer in me couldn’t resist.

Yreka, near the California-Oregon border, is the halfway point on I-5 between San Jose and Newport. After seven hours of driving, I needed a walk. Usually I walk in town, looking in the windows of the shops, all closed by the time I get there, and the restaurants I might go into if I weren’t traveling solo. I say hello to the brass sculptures, nod at the firemen in the fire station, and study the sign at the Catholic church, thinking I might go to Mass in the morning, but I never do. I’m too anxious to get back on the road.

This time, I headed the other way, across the freeway, away from “town.” Up a hill lies an old cemetery where I walked among the graves, reading names and dates, imagining their stories. Taking a different path down the hill, I wound up close to the train station. The 1910 station building looks as if it just closed for the night, but it has been out of business for several years. After its citizens learned in the 1880s the Southern Pacific Railroad/aka California & Oregon Railroad planned to bypass their town, they built their own railroad line to connect up with the main line seven miles away in Montague. They moved the station in 1910 to avoid seasonal flooding at the original site. Trains used that line for passengers and freight for nearly 100 years. Starting in 1986, the city of Yreka operated a summer excursion train called the Blue Goose. But times change, and the Blue Goose went out of business. The station has sat idle for the last few years. 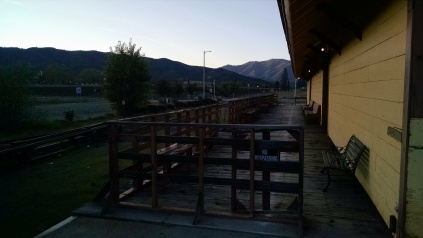 Imagine the stories that crumbling old platform could tell. I’m so glad I didn’t see the sign until I had walked all over the station, my only company a couple of crows cawing from the roof.

By the way, the origin of Yreka’s name is not what you might think, not what I thought. Here it is, courtesy of California City News:

Yreka comes from the Shasta Indian word “wáik’a’,” which roughly translates to “white mountain,” in reference to nearby Mount Shasta. An article from 1876 in the Yreka Journal said that the city was intended to be named Ieka, but through some kind of mistake, it was called “Wyreka.” The name stuck and the error continued (other than the dropping of the “w,” which officials considered superfluous.)

This was my third trip to California since March 25, when my 95-year-old father broke his leg. He will be riding the wheelchair and I’ll be doing the I-5 commute a while longer. Bones that old take a long time to heal. I have made the journey back to San Jose at least 50 times since we moved to Oregon 20 years ago, but I always see something new.

The Yreka, California chamber of commerce is not going to tell you about this walk. Usually I walk downtown, where everything is closed, except for the bars. I pass historic buildings, intriguing stores, restaurants, and little parks, all very nice, but I have been staying in Yreka on my trips to and from San Jose for 19 years. It’s halfway and the Best Western always has vacancies, although the prices have doubled.

Tuesday night at dusk, I turned left instead of right to see what lay beyond the freeway. Past three freeway entrance/exits, under the bridge, past a lot of litter, and a deserted-looking train station, I found real life. Houses, school buses, a barking dog, warehouses across the street from new apartments, a YMCA with an exercise trail, and a cemetery, dating back to the mid-1800s.

I know this town has a lot of history. It was big in the gold-mining era, and now the miners’ descendants lie here. Many of the names are Portuguese, like my maternal ancestors. Some of the graves are marked with old white stones so weathered I can’t read the names. Some are not marked at all but are surrounded by iron fences. There are new graves, too, decorated with artificial flowers and flags left over from Memorial Day.

I’m poking around the graves when I see three deer a couple rows over. One seems to be standing guard as the others sniff at the flowers. They watch me, but they don’t run as I move closer, snapping pictures. Finally I get too close and they trot away. I look around at the surrounding yellow hills and wonder what I’ll see next as sunset pinks the clouds. I love the openness of this place, so unlike where I live surrounded by trees. Working my way back to the street, aware that it’s getting dark and I ought to get back to the safety of the motel, I smile at a man and woman walking two little dogs, part of real life on the other side of the freeway.

All these years, and I never thought to look. In the morning, before I got back on the freeway, I drove around Yreka a bit. Great Victorian houses, churches, schools, offices. The Best Western Miners Inn is good, but there’s more to see, just as there is at every freeway exit between here and there.