Our father left my brother and me money. He left us his house. He left an enormous quantity of photos without names on them. He left a pile of paperwork that dates back well into the last century. I filled my car twice with things I wanted to keep: the St. Francis statue I gave him eons ago, my grandmother’s tea set, some of Mom’s jewelry, the crucifixes from the walls, books, movies on VHS tape and DVD, the wooden bears and the howling wolf that I gave him for Christmases past, new sheets that had never been unwrapped, Christmas ornaments, an unopened carton of oatmeal—so much. But there was a lot more to be tossed or given away. Imagine if you were taken out of your home by ambulance and never returned. After 97 years of life and 70 years in that house, Dad left a lot of material things, as well as a lifetime of memories and experiences.

Two items were of particular interest to this musicaholic: Grandpa Fagalde’s accordion and Dad’s harmonica. One is a huge beast, and the other can fit in my purse. I don’t know the history of either instrument, but they live with me in Oregon now.

We had never seen the accordion, weren’t even sure if Dad had it anymore, but my brother found it in the back of the middle bedroom closet in a black case. Since I traveled to the funeral by plane and couldn’t take it home then, Mike stored it at his house, where I claimed it at Thanksgiving. Inside that black pressboard case sat a marvel of engineering and music. It made noise as soon as I touched it, getting me in trouble because Mike’s grandchildren were napping. But I knew nothing about playing accordion, including how to keep it quiet when you weren’t playing it. I thought it just stayed mute until you did something. 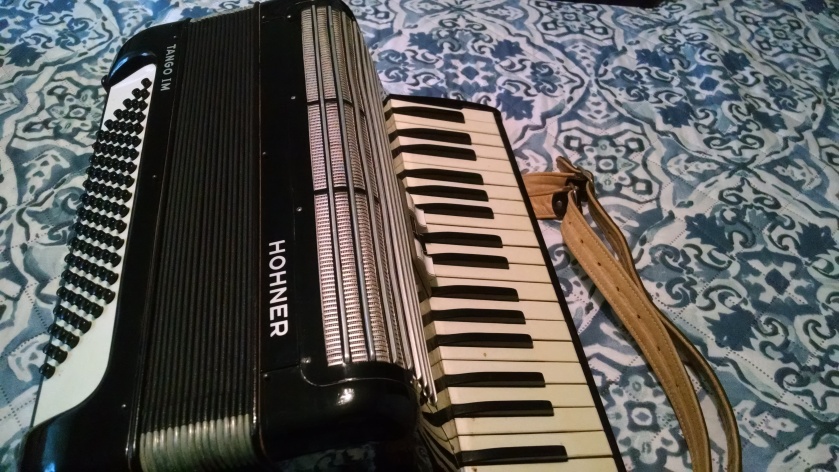 What can I compare to putting on that accordion? An iron lung? A divers’ air tank? I don’t know. It’s awkward, and it’s heavy. I remember an old friend who had played accordion all his life. His chest and arm muscles were massive. Now I can see why. But I got it on—once I figured out which way was up. Keyboard on the right, buttons on the left.

The 2 ½-octave piano-style keyboard was familiar. I couldn’t see it very well, but once I found Middle C, I could play a tune. But what about the bellows and all those buttons, dozens of buttons? And why did just a few of them have dimples on them? Were they damaged, or were they supposed to be that way?

What kind of accordion was this anyway? Hello, Google. It was a Hohner Tango IM,  worth about $800 today. Grandpa, a frugal wheeler-dealer, probably got it at some secondhand shop. He would not have paid that much. Or maybe he inherited it from someone. Although he told lots of stories, he never told that one, nor did he ever play it when we were around.

Oh, my shoulders. It took me four tries to get the accordion back into the case. Later, I ordered a “how to play the accordion book” from Amazon. Okay, so you play the piano notes, pump the bellows in and out, and push the buttons for the bass notes. They are lined up by key–bass note, major chord, minor chord–but you can’t see them, so it’s all by feel.

I managed to oom-pah, badly, in C, doing two-line songs like the ones on which I learned piano 60 years ago. Musicians know the kind of song, one note at a time, with titles like “Trapeze Waltz” and “Country Picnic.” It went: bellows OUT, C note, C bass, C chord twice, bellows IN, F note, F bass note, F chord, OUT, C note . . . I could feel the power of the bellows, like big lungs breathing in and out, but oh my shoulders, my back, my neck. Not having an in-house chiropractor, I couldn’t play it for long.

Suddenly the piano seems so easy, and the guitar feels blessedly light

My brother poo-pooed the idea, but I really think the accordion was made for a man-sized person with bigger shoulders and a longer torso. Me, it filled from chin to hips. But I’m interested. If I could master this beast, I could take it where I don’t have a piano to play. I would never need to amplify it because it’s naturally loud, a party in a box.

Dad’s harmonica weighs almost nothing. It’s a Marine Band 14-hole model, key of G, a few notes longer than the 10-hole harmonicas that I bought for myself. I don’t know where he got it, although I suspect he bought it during WWII. Did he while away his few spare hours playing it in his tent in Australia or the Philippines? I like to think so. He rarely played it at home. When he did, we kids came running, excited. A harmonica can sound like a party, too. He never played long, but those minutes of music were magic.

Now I have that harmonica in its well-scuffed original red cardboard box, which says Marine Band No. 365, made by M Hohner Germany. It was in the dresser drawer with Dad’s tiny black-and-white photos from the war years.

This instrument I can play. I have had one live lesson and gone through several harmonica books. Instead of the three things you have to do at once on the accordion, you do two on the harp, blow and suck (or draw), and not at the exact same time. Each harmonica is set for a different key, so you can’t go far astray no matter what note you play.

On Thanksgiving, after the grandkids went home, I played my greatest hits on Dad’s harmonica:”O Susanna,” “Amazing Grace,” and “Silent Night.” I can also do “Jingle Bells.” I never practice, and I generally don’t use sheet music for the harmonica. I just breathe in and out and see where the music goes.

I like the idea of playing an instrument I can keep in my pocket. It’s no coincidence that in my novel Up Beaver Creek, someone gives my protagonist PD a green harmonica and she carries it in her pocket after the disaster. I got one just like it in the church choir gift exchange the year I was writing the book. We were at Lee’s Wok. It’s surprising how few people in a restaurant want to hear me play “Jingle Bells” on the harmonica. But to me, it’s magic. Harmonicas don’t even go out of tune. Dad’s must be at least 75 years old, and it sounds fine.

Playing the harmonica is a very intimate thing. It’s in your mouth, right? That’s why that one group lesson I took at California Coast Music Camp was frustrating. The teacher couldn’t see what we were doing with our lips, teeth and tongues. He could only go by the sounds that came out. I spent the whole class trying to “bend” notes, that wah-wah sound you hear when people play the blues. It’s not easy, especially if you’re not playing a “blues harp,” which has thinner reeds that bend more easily. Oh yes, there’s a lot of engineering goes into this little thing.

This website with lots of info about harmonicas warns people to NEVER accept a harmonica that someone else has played because it will harbor whatever diseases they had. But this one came from my father, flesh of my flesh and all that, and whatever germs were in there died long before he did.

I have also learned the hard way that you need to play it with fresh breath and no lipstick.

Harmonicatunes.com gives some history of the harmonica. I would not have guessed that it started in China thousands of years ago. In the 1800s, it moved into Europe, especially Germany, and from there it migrated to the U.S. The Marine Band model, like this one, was introduced in 1896, the year my grandfather was born.

As the site notes, those who think this is just a fun instrument for people who can’t play real instruments are wrong. Check out the recording on the site. It sounds like a fast-moving fiddle, but it’s a harmonica. I’m not quite up to that level yet. Want to hear my “Jingle Bells?” What do you mean, not again?

Can I take it to church? Has anyone heard of liturgical harmonica? Why not?

I have been storing my harmonicas, all 10-holers, in a tin rectangular Campbell’s soup can, but now I need something bigger and softer. I will be looking to buy or make one soon.

And maybe I need to get a Sherpa to hold the accordion while I play it. Imagine the fun a body could have playing both at once: keys, buttons, in and out, blow and suck all at the same time! Hey, Grandpa and Dad both lived into their late 90s. It’s worth a try.

Years ago, when I was flying to Los Angeles for grad school, I had tucked a harmonica into my carry-on. The TSA agent, who hailed from another country, pulled me aside and took out the harmonica. “What is this?” she asked.

She showed no recognition.

“A musical instrument. Do you want me to play it?”

She didn’t want to hear “Jingle Bells either. I suppose on the X-ray, it looked like two flat blades. It took a while to convince her it was not some kind of weapon, although I suppose, in a pinch, you could disable people with those high-high notes. She let me take it on board, but I have not carried a harmonica on a plane since.

I have carried my “harps” in my car. On those long stretches of I-5 between Newport and San Jose, I play a tune now and then. It only takes one hand, and I can still watch the road. Is that distracted driving? I hope I never have to explain it to the Highway Patrol. They really wouldn’t want to hear “Jingle Bells.”

I definitely won’t be playing an accordion and driving at the same time. I promise.

Thanks, Dad, for some very cool Christmas presents. I’ll miss you this year.