I have been walking this road since my late husband Fred and I moved to South Beach in 1998. For the first eight years, I walked it with our dog Sadie and sometimes with Fred. Now I walk it with Annie. This road, officially 98th Street, was once known as Thiel Creek Road. Where the pavement ends, it forks into an upper and lower branch. We adopted Annie on the lower branch from a family that had two litters of puppies. The house is vacant now, but when we walk down there, Annie, who will turn 6 on Feb.16, still pauses to listen and smell and perhaps to remember. There’s something about this place . . . 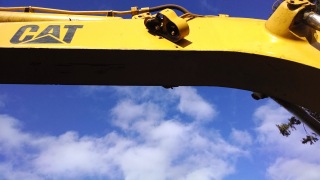 Although I’ve worn out several pairs of shoes on this road, I’m still not tired of it. There’s always something new to see. Last week it was a new layer of rocks that bruised my feet right through my sturdy shoes. I also saw fresh deer tracks in the mud. The Scotch broom is tall and green now. It will soon sprout flowers so yellow they light up the sky. Wildflowers will follow and then wild blackberries which Annie and I will eat off the vines.

Paths lead off into the trees and shrubs. The ones we took with Sadie are overgrown, and some are blocked with concrete barricades, but a new path carved out by road workers a few years ago parallels the backs of the homes on Cedar Street, turning back around to Cedar at a wide viewpoint overlooking a ravine and the airport beyond. The path is isolated. I study the paw and hoofprints on the ground, seeing many dog prints and tennis shoes but also signs of deer, coyote, and bears. Annie and I both keep our senses alert here, ready to react if another creature appears.

Man leaves his mark, too. Unlike the street, where I can always find hamburger wrappers, empty cigarette packs, and Starbuck’s cups, the paths are usually clear of litter. But I see big yellow Caterpillar tractors parked along the road and muddy scars where they have carved out openings in the trees and brush. When we first moved here, we were told that the property owner–and yes, someone does own this wilderness–had plans to build a housing development and golf course resort. It hasn’t happened. We have also heard that the airport might build a new entrance off 98th Street, which would add a great deal more traffic, but that hasn’t happened either. The tree line has moved farther east, trees ripped off their stumps and carted away for lumber. But new growth sprouted up in their places.

If there is any sun, it shines on this path. Sometimes in late afternoon, we see the moon above the trees. We rarely see any other people or animals, but when we do, I wave and they wave back. The seasons of nature and of our lives change, but we continue to walk this road, rain or shine, and we always notice something new.