In December, I issued my edicts for the annual Twelfth Night festivities. There would be feasting, all would perform, and we would dress “to the nines.” Ah, the thrill of power as my subjects scrambled to obey. We gathered at the Cramer castle in north Newport, where Ms. Sandy had assembled a dessert bar worth of royalty: chocolate flowing from a fountain, fudge, marshmallows, pound cake, Christmas cookies, fruits and nuts, and a liquor bar abounding with red wine, beer, lemon drops and “appletinis.”

The attendees, dressed in their finest–and gaudiest,-came bearing ambrosia, pizza, French pastry, fried chicken, and more. We noshed to bursting.
Then, by order of the queen, we gathered in the drawing room for the performances. Some sang, some read poetry, young Mistress Danielle awed us with a musical theater recitation, and Ms. Orpha filled us with laughter and horror as she described in hilarious detail the creation of the French pastries whose name this royal highness can’t quite spell. It seems one of Ms. Orpha’s glittery fingernails disappeared in the process and any one of us might perhaps find the next bite a bit–how shall I put it?–crunchy. Quelle horrors!

Exhausted with our efforts, we retired to the dessert bar to share the royal cake which would determine the next queen or king. Usually the new royalty is the one who finds a ring in his or her slice of cake, but this year, it was a tiny rubber doll. Mr. David Cramer found the royal doll on his plate, earning the title of King David I of Newport. All hail King David. 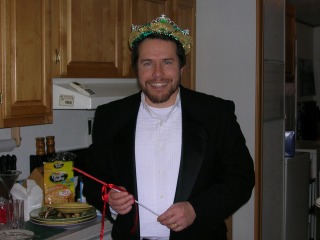 I yielded my crown, which included flashing green lights, to my successor and settled at the piano for the last Christmas singalongs of the season. Thank God.

A good time was had by all.