This is the time of year when the Oregon coast is flooded with tourists. Suddenly it takes twice as long to drive through town. We have to wait for tables at our favorite restaurants. They wander the aisles at J.C. Market in groups, carrying beer and tortilla chips. I look out at the people in the pews at church, and see mostly unfamiliar faces.

Among ourselves, we curse the tourists, especially those slowing traffic with their RVs laden with bicycles, kayaks and little perfectly matched cars. But in public, we call them visitors to be polite. After all, most of us were once tourists, too, before we became born-again Oregonians. And we know, in our hearts, that we are just as clueless when we go on vacation.

How can you tell the tourists from the locals?

1) License plates from elsewhere, mostly Washington, Idaho, California, Arizona, New Mexico and British Columbia. But we get people from all the other states, too.

2) They walk around in shorts when it’s 50 degrees out—with an Oregon Coast hoodie they just purchased for $50 at a gift shop because they were freezing. OR they bundle up for the Arctic when it’s 65, which we consider warm.

3) They dawdle on the roads because they’ve never seen an ocean before or don’t know where they’re going. If from California, they drive 10-20 mph over the speed limit, not realizing cops actually do give speeding tickets here.

8) They come in bunches, filling the whole car or the whole booth at the restaurant, and they go ga-ga over clam chowder.

9) They use a GPS when all you need to know is you’ve got the ocean on the west and the hills on the east and can’t get lost. Just follow the numbers north and south or the alphabetic tree names east and west.

I know there are more. Feel free to add your own tourist clues in the comments. Although they clog up our traffic, our visitors keep our economy going, so we’re glad they’re here. We like to share our beautiful home. After all, Newport’s slogan is “The friendliest.” Besides, most of the visitors will flee when the rain starts. If we had spent the winter here before selling our house in California, we would have fled, too. 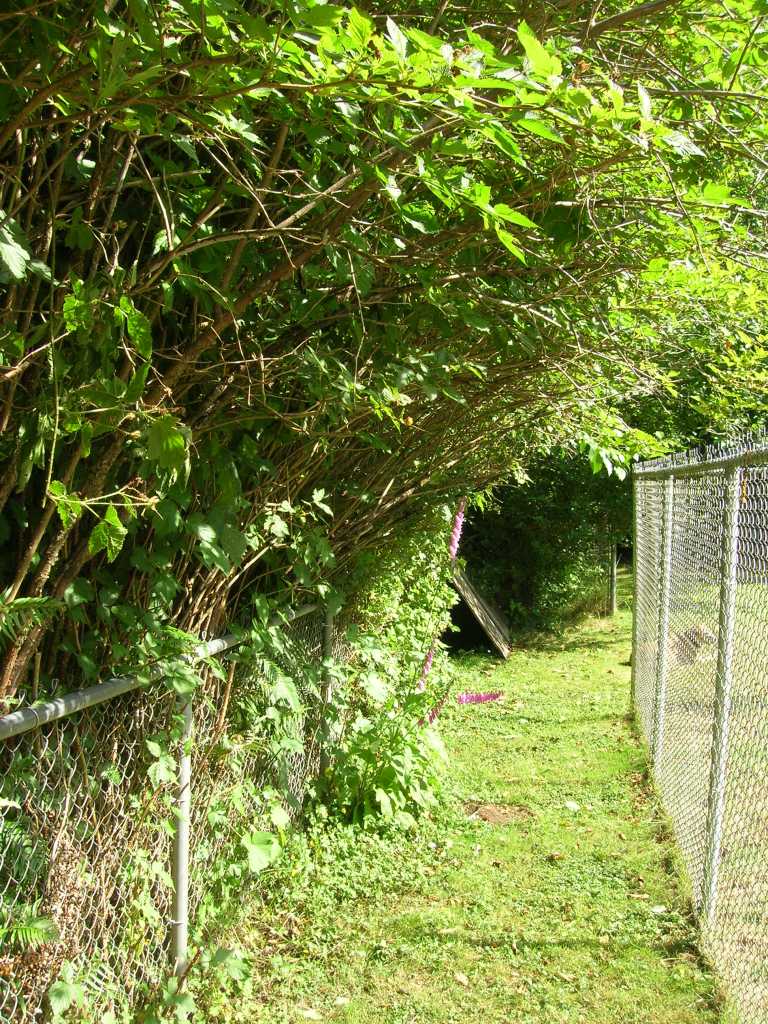 I spent a lot of the Fourth of July weekend in hand to vine combat with wild berries. I believe in letting wild things grow, but when they attack my house and make it difficult to walk through the yard, I have to attack back. My garden pretty much consists of plants that planted themselves. Invasive plants, the rest of the world calls them, plants that grow wherever they want and keep expanding their territory. Blackberries, thimbleberries, salmonberries, huckleberries. Salal, sword ferns, foxglove, poppies, ivy. And honeysuckle. Just when I learn what those flowers are and start thinking I’m lucky to have them, I discover that they too are invasive plants. Looking more closely, I see that they’re already battling for space with the berries out front.

Real gardeners would get in here with a chain saw or a tractor and cut all this stuff out so we could plant something pretty that knows its place in the garden. But why cut out plants that are hardy and attractive just because we don’t think they should be there? Okay, I’m a little angry at the berries that are choking my big hydrangea plant to death. But in most of the yard, I have neither the time nor energy to clear, plant and tend a garden, so why not let Mother Nature take care of it? What gives a human being the right to clear a rectangle in the forest and kill anything that threatens to come in? If you can’t beat ‘em, let ‘em grow, right?

However, just like they’re choking the hydrangea, the berries were also threatening to overwhelm me and my house. They were pushing against the fence and the deck to the point where I had to fight back so that I could walk the path to my gate without thorny branches grabbing my hair and my clothes. I suffered endless thorn pricks to my hands as I cut and cut, trying to take back my one-third acre of land. I cut enough to fill the 96-gallon compost cart and more, yet it’s hard to tell I did anything because there is so much plant life.

Back in California, they’re suffering from the drought. Only the hardiest plants will survive. My father’s planted berry vines have dried into brown strings with a few berries shriveled up like raisins. We’re short on rain here in Oregon, too. Numerous counties have declared drought emergencies. But on the coast, even after a month with no measurable rain, everything is blooming, growing, and threatening to break down the fences.

With my little clippers, my loppers and my yellow wheelbarrow, I fight to protect my space by cutting a little here and there and claiming the rest as my bountiful garden. As for the sore muscles and the bloody cuts where the thorns got me, I consider them badges of honor. I held the enemy off again.

Meanwhile, my dog Annie is already eating blackberries on our hikes. To her, the world is one big smorgasbord. Who’s to say she isn’t smarter than we are?

What is a weed anyway? It’s a plant we didn’t put there, something that grows up on its own, seeded by birds or wind or bulbs hidden underground. Some, like Bermuda grass, are just annoying. And some get out of hand, like our wild berries that take over the garden. But many so-called weeds, especially here in our Oregon coastal forest, are a lot prettier than anything I could plant. Healthier, too, because they’re perfectly adapted to the growing conditions here. I didn’t plant any of the “weeds” pictured here.

The star of the show this year is Foxglove, technically digitalis purpurea. The name gives you a hint that it’s the source of digitalis, used medicinally for heart patients. It turns out to be toxic to animals, so if Annie could reach it or if she showed any interest in eating it, that weed would be gone, but so far, she and I just stare at it.

It started as a clump of leaves next to my deck. Feeling lazy, I decided to let it go a while and see what developed. Then I went away for 11 days. When I returned, wow! It was taller than I am and loaded with pink flowers. Two companion plants had sprouted up nearby. According to Coastal Wildflowers of the Pacific Northwest by Elizabeth L. Horn, the Foxglove takes two years to produce flowers. The first year, all you get is leaves while it gears up for its spectacular show.

Botanical.com says the name Fox Glove started as Folk’s Glove and came from the fact that the flowers looked like little finger gloves.

When the flowers fall off, I plan to pull out the Foxgloves near my deck. It’s not a good location, and there are plenty of others growing up along the edges of my property, but for now, I’m enjoying the show. 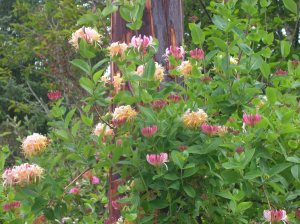 The Foxglove is not the only flower putting on a show these days. Out front, the poppies are going crazy, the salal is at its peak, and we have honeysuckle, wild roses, daisies and buttercups along the street. The blackberries and thimbleberries have flowers now but will soon bear fruit, and the tops of the salmonberries are already showing some bright yellow berries. Soon my yard will be full of drunken robins.

I love to garden, but God is a lot better at it than I am. This spring, I’m going to go easy on the weeds and see what else develops.

Yesterday was one of those days when it was easy to remember why we left Silicon Valley for the Oregon Coast. The day had its challenges (rejections, home repairs, computer woes), but it certainly had its consolations. Let me share a quick list:

This is why we moved to Oregon.