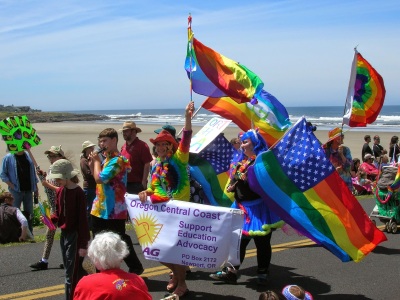 Ah, Fourth of July on the Oregon Coast.

We started with the La De Da parade in Yachats. It’s a parade unlike any other. No marching bands, no floats, just ordinary folks in their most outrageous get-ups marching in a big circle from the Commons to the park that overlooks the waves crashing off the rocks and around the bend and down the street overlooking the bay. You’ve got your umbrella drill team twirling umbrellas in unison, your tree huggers decked out in ivy crowns, your folks from the pizza place dressed like giant pepperoni slices, your dogs in patriotic sweaters, George and Martha Washington taking a stroll, a rock and roll band playing blow-up plastic guitars, and the local ambulance and fire truck drivers rumbling through, honking their horns. The onlookers are as colorful as the marchers. In a half hour, it’s over and folks are gathering to eat barbecue and homemade pie.

I brought two young friends, Ashley, who just moved down here from Alaska, and her friend Matt, who lives in Davis, California. This was their first introduction to Yachats. They were appropriately delighted with both the parade and the sunny but not too hot weather.
For lunch, we joined the noisy crowd at the Drift Inn. As we ate and talked, this guy came in, shouting, “Fresh halibut!” He carried a gigantic dripping fish over his shoulder as he walked between the tables where tourists ate nachos and clam chowder. They put down their forks and spoons and applauded. He brought in two more halibut. I wonder where he put them in the small kitchen at the back. It would be like trying to fit a Buick into a Barbie garage.
After lunch, my guests headed north while Annie and I took our usual walk, then relaxed with a bit of the “Sex and City” marathon happening on TV. Still to come were the Newport fireworks. 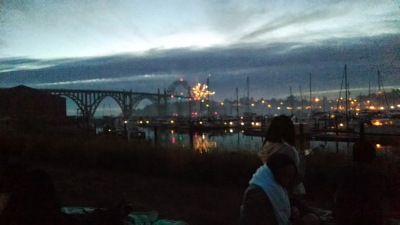 Most years I decide I’m not going to go. Too crowded, too late, I don’t need it. But then I start hearing the popping of the aerial displays. I can’t see anything because of the trees that surround my house. I can’t stand it. I get in my car and drive until I can see some of the fireworks from some illegal parking spot on a hill. This year I decided to go see them on purpose.
By 9:00, it seemed everyone in Newport and a few thousands tourists had gathered on both sides of Yaquina bay with their folding chairs, their glow-in-the-dark necklaces and their boxes of do-it-yourself fireworks. In every direction, Roman candles shot up into the air, little kids swirled sparklers, and big kids lit up things that went boom. The smoke grew thick like fog. The air over the bridge and over the hills lit up with starbursts of color. Dogs barked, kids screamed, and mosquitoes went crazy with so many people to bite.
The official fireworks started at 10:00, lit from a barge in the middle of Yaquina Bay. All around me, people raised their Smart Phones and iPads, trying to take pictures. Me too, until I realized I could either take pictures or actually see the fireworks. Pop, bang, ooh, wow, ahh. I’ve seen bigger displays, coordinated with patriotic music, but this one was good and the company was great.
Then came the applause and the traffic jam, but nothing like I remember back in San Jose when it might take two hours to get home. When I drove into my neighborhood in the woods at 10:45, my headlights picked up a young male elk standing in the street. As I paused, he ambled over to the neighbor’s yard and calmly stared at me as I drove to my house at the end of the block.
And people wonder why I moved to Oregon.

Ever get the urge to sing or play music with other people without actually having to be a performer? Me too. I spend plenty of time with a microphone in front of my face, but it’s nice to just play and sing for the fun of it. That’s why I was happy to hear that my friend Stacey Smith was starting a new Song Circle in Yachats. She and I enjoyed a former song circle in Newport for a couple of years. We even formed a band called Just Smith with circle host Kurt Smith (not related to Stacey). We played at the Drift Inn and elsewhere until life got too complicated and we disbanded.

This was in the years when my husband Fred was suffering from Alzheimer’s Disease and the music provided much-needed relief from the burdens of living with that difficult and always fatal illness. We made new friends and made beautiful music. The love of music stayed with Fred right up to the end.
So what’s a song circle? People sit around in a circle and take turns leading songs or suggesting songs for someone else to lead. They may sing something that nobody else knows, maybe even an original song, but most of the time people suggest easy songs that everybody can join in with their voices and their instruments. Sometimes we have words and chords on handouts or in an encyclopedic songbook called Rise Up Singing. Sometimes we just listen and watch each other’s guitar-playing hands and follow along. It doesn’t have to be perfect, and if you don’t feel up to leading a song when your turn comes, you can pass. You can even just come to listen.
We had eight people for the first session, with two acoustic guitars and a violin, and we sounded pretty good. Stacey is planning to continue the song circles once a month. I’m looking forward to the next session on April 7 from 3 to 5 p.m. at the Yachats Commons, Highway 101 and West 4th Street, Room 8. If you’re in the area and feeling musical on a Sunday afternoon, come try it out. 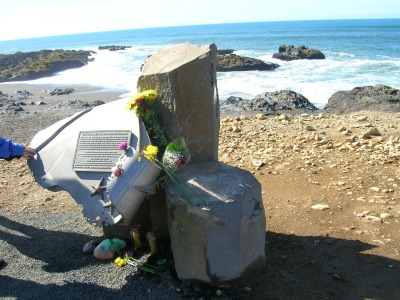 For my birthday last weekend, my friend Pat offered to take me hiking on her new favorite trail, the 804 Trail in Yachats before having lunch at the Drift Inn. I’ve been there before and would never turn down a chance to walk the 804.
When we arrived at Smelt Sands Recreation Area, where one accesses the trail, the place was packed with cars and people. Pat asked a nearby ranger what was going on and found out it was the dedication of a memorial for two high school seniors from Eugene who died there in February 2011. They were goofing around on the rocks when a sneaker wave caught them and washed them into the wild surf. According to the plaque on the memorial, they could not escape the waves and died within three minutes while their classmates watched in horror. 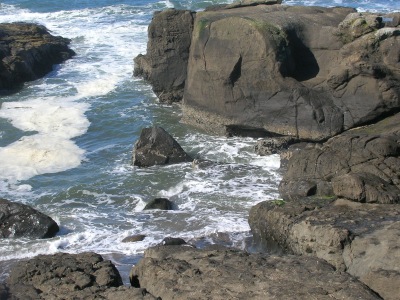 It’s easy to see the danger. As we walked and took pictures of each other and the waves, the surf crashed against the rocks with loud booms and sprays that went up 20, maybe 30, feet in the air. With the rocks, the sea and the blue sky for background, it’s just beautiful. But it’s also dangerous. Even as loved ones in black suits honored their dead with flowers and speeches and a new monument, other young people walked on the rocks near where the waves were breaking. Signs everywhere warn about the dangers of high surf and sneaker waves, but somehow we all have this feeling it can’t happen to us. It can. Ask the families and friends of Connor Ausland and Jack Harnsongkram. Stay on the trail and don’t turn your back on the ocean.
If you use common sense, the 804 Trail is a fabulous place to walk. The trail, mostly paved and flat, winds along the rocks and through the trees and ultimately comes out at a long sandy beach. Lots of people walk it, many with dogs, and it’s a great place for taking pictures. 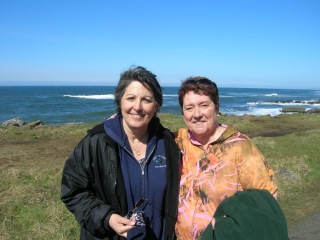 Why is it called “804?” This trail is thought to have started as a footpath for tribal people. Later it became County Road 804, from which the trail got its name. Local advocates spent years battling with local governments and property owners before the whole trail from the Yachats River to the beach was finally opened to the public in the late 1990s. You can access it now off Highway 101 from either Smelt Sands or from Yachats State Park. It’s easy walking, and most of it is wheelchair accessible. Bring your camera and please stay off the rocks.
Invigorated by our walk, Pat and I pigged out at the Drift Inn, a favorite local eatery. I was already stuffed with crab and avocado pizza when our waiter brought a huge bowl of marionberry cobbler topped with vanilla bean ice cream and a candle. As he and Pat sang “Happy Birthday,” I couldn’t think of anything to wish for because I had everything I wanted at that moment.
It was a great birthday, and I thank everyone for their good wishes. Even the weather was kind to me on March 9. The next day, the rain returned, but that’s okay. Another birthday survived.