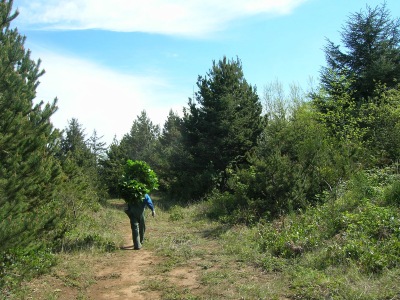 The bushes rustled and shook. Something big was in there. And it was coming our way. Annie froze. I looked around. Nothing but trees, shrubs, birds and field mice for a half mile in any direction. Newport Airport to the north, trees to the east, more trees to the south, houses too far away to the west. No humans close enough to save me from whatever it was. It might be a deer, an elk, a cougar or a bear. All have been seen in the area, although not usually in mid-afternoon. We hikers are instructed to remain calm, keep talking, and fluff ourselves up as big as possible to convince the animal that we are more scary than they are. If that doesn’t work, duck and cover and hope to survive. Having an unpredictable dog with you does not help.
I tugged on Annie’s leash. “Come on. Come on. We have to get out of here.” She moved an inch at a time, too scared to walk. The creature was coming closer. Sweating under my tee shirt and hoodie, my heart pounding, I continued trying to drag my dog toward the safety of the road. But we weren’t fast enough. The creature was coming out, coming out, here it was.
Oh. “I thought you were a bear!” I exclaimed to the Mexican man with a giant bouquet of salal leaves balanced on his shoulders. I don’t think he understood a word. I tried to form a sentence in Spanish. I knew “oso” was bear, but I couldn’t figure out the verb tenses to say I was afraid.
Annie stared, her tail between her legs, still afraid. To her, he looked like a man with no head, just a bunch of leaves. “It’s okay, it’s okay,” I told her as Leaf-Man went by us, soon followed by a leaf woman with another big bunch of greenery. The two work for the company near our home that sells greens to florists to put in bouquets with roses, carnations and other flowers. Several times a week, a giant truck backs up to the dock at 98th and 101 to be filled up with bundles of leaves they gather from the wilderness areas around South Beach.
Yesterday, when I saw the bushes moving again in the same general area, it occurred to me that THIS might be a bear, but I doubted it. Sure enough, another man emerged with a big bundle of leaves. He was wearing hip-high rubber boots. Annie didn’t like the looks of it at all, especially when he hefted the leaves up over his head and walked by us. But I had my camera this time, so I snuck a picture of the fabled Leaf-Man.
Someday the rustling in the bushes might be a bear, especially when all those blackberry vines full of flowers start producing fruit. If so, I hope Leaf-Man is nearby. That ought to scare any old bear.

My Tweets
Join 697 other followers